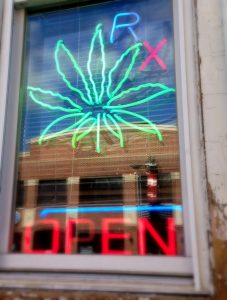 Today’s research, as well as the thriving legal marijuana economy, is largely the result of a medical cannabis movement born in the AIDS epidemic and the suffering of young gay men, many of whom turned to cannabis to try to curb wrenching symptoms of wasting syndrome starving them to skeletal forms. In San Francisco, ground zero for the epidemic, Donald Abrams, M.D., an openly gay oncologist and hematologist at San Francisco General Hospital, began a protracted campaign to convince federal agencies to authorize medical research into potential benefits of cannabis. As told in my book, “Weed Land” and adapted in an excerpt here, Abrams ultimately conducted a clinical trial that revealed that cannabis use didn’t interfere with antiretroviral drugs for treating AIDS and HIV and showed promise as well for boosting appetite and weight.

Inspired by Abrams’ work, the California legislature in 1999 allocated $8.7 million for the first state-sanctioned studies and clinical trials on marijuana as medicine. The University of California system’s Center for Medicinal Cannabis was created in 2000 and headquartered at U.C. San Diego. Other efforts have followed in additional states, expanding scientific knowledge on cannabis and its potential medical applications while essentially challenging federal orthodoxy on the drug.

At Health Journalism 2018 in Phoenix, journalists will be able to ask questions and learn from two clinicians on the front lines of modern medical cannabis research in the “Science of marijuana” panel on Thursday, April 12, at 3:15 p.m.

Barth Wilsey, M.D., a board-certified anesthesiologist and pain management physician with a broad background in clinical research, led two trials with the Center for Medicinal Cannabis and published journal articles examining the effectiveness of different cannabis doses in treating neuropathic pain from conditions such as diabetes, spinal cord injuries and complex regional pain syndrome. His most recent study for the University of California Center for Medicinal Cannabis research is examining effects of vaporized cannabis and oral THC (dronabinol) on chronic low back pain.

Sue Sisley, M.D., a psychiatrist and former clinical assistant professor at the University of Arizona College of Medicine who is now with the Scottsdale Research Institute, is helping lead the first randomized control trial on the efficacy of marijuana in treating post-traumatic stress in veterans. The study, funded with a $2.2. million grant from the Colorado Department of Public Health and Environment, is examining four strains of cannabis for effectiveness with treatment-resistant veterans with PTSD.

To learn more about cannabis research and how to cover this emerging field, join us in Phoenix or follow along on Twitter with #AHCJcannabisresearch. Here are some extra resources to study up: