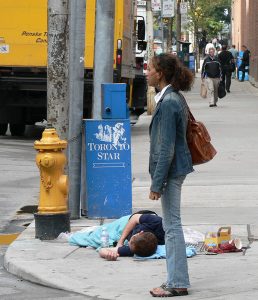 Medicaid work requirements going into effect in at least a handful of states will only affect the “able-bodied.” But precisely what does that mean?

Emily Badger and Margot Sanger-Katz unpack that term, as well as “deserving poor.” They say in“Who’s Able-Bodied Anyway?” for The New York Times’ Upshot blog, that the “able-bodied” are defined by what they are not – “ not disabled, not elderly, not children, not pregnant, not blind.”

Even so, this is a mushy label – more political than scientific. “Across centuries of use, it has consistently implied another negative: The able-bodied could work, but are not working (or working hard enough). And, as such, they don’t deserve our aid,” Badger and Sanger-Katz write.

That encapsulates a decades-long debate – one could argue centuries-long – about the “deserving” or the “undeserving” poor. And the new Medicaid work rules, still being fleshed out, may embody such judgments. It goes to a fundamental debate both about health care (Is it a right? Our country’s politics strongly suggest we have not agreed as a nation that it is.) and about Medicaid (Is it a health program, or, as many leading Republicans would argue now, is it a welfare program?). The ACA, with its Medicaid expansion to just above the poverty line regardless of how “able-bodied” they were, or whether they had dependents, clearly saw it as a health coverage program. That is not the view in D.C. now.

Badger and Sanger-Katz quote a researcher at the conservative Heritage Foundation researcher on this point.

“Free riders threaten society — they undermine the basis of altruism,” said Robert Rector, a Heritage senior research fellow who helped write a work requirement into welfare reform in the 1990s. That’s not a liberal or conservative belief, he argues, but a human one. “People want to be compassionate, but they don’t want to be taken advantage of.”