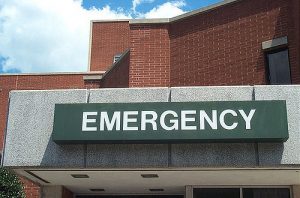 Emergency medicine physicians contend that Anthem’s policy regarding payment for emergency room visits in some of its markets has been putting patients’ lives at risk.

In six states so far, Anthem has a policy to deny coverage for emergency room visits that it later determines were not emergencies.

In a HealthLeaders Media article last week, Gregory A. Freeman quoted Ryan Stanton, M.D., an emergency medicine physician in Lexington, Ky., who warned that death would be an inevitable result of the policy.

“They’re not going to change it until somebody dies and they get sued. That is going to happen at some point,” Stanton told Freeman, referring to Anthem and the ER policy it began rolling out in 2015.

Stanton is a member of the American College of Emergency Physicians (ACEP), which opposes the policy. ACEP President Paul Kivela, MD, said in a release earlier this month:

“Anthem is risking patients’ lives by forcing them to second-guess their medical symptoms before they get to the ER, and some may not go when they need to.” Two patients with identical symptoms could have different diagnoses – one life-threatening, one non-urgent. Insurers cannot reasonably expect patients to know the difference.”

It is unknown if any patient has died as a result of the policy. Anthem responded to an AHCJ request for comment as follows:

“Anthem’s goal is to ensure access to high quality, affordable health care, and one of the ways to help achieve that goal is to encourage consumers to receive care in the most appropriate setting. Anthem’s ER program aims to reduce the trend in recent years of inappropriate use of ERs for non-emergencies. Emergency rooms generally treat life threatening situations, and if a consumer feels he or she has an emergency they should always call 911 or go to the ER. But for non-emergency health care needs, ERs are often a time-consuming place to receive care and in many instances 10 times higher in cost than urgent care.

“If a consumer chooses to receive care for non-emergency ailments at the ER when a more appropriate setting is available, an Anthem medical director will review the claim information and medical records submitted by the provider using the prudent layperson standard. In the event a member’s claim is denied, they have the right to appeal.

“Anthem has, and will continue to make, enhancements to our ER program to ensure effective implementation on behalf of our members and customers.”

In its response, Anthem added a list of conditions in which it would pay for ER visits (see below) but did not address the concerns ACEP raised about how the policy put members at risk, saying, “we don’t have any further comment beyond the statement.”

As Sarah Kliff reported for Vox, there are no estimates of how many patients the Anthem policy has affected or what results Anthem has achieved with it. “Anthem declined to provide such figures, only saying denials represented a small percentage of claims,” Kliff wrote. Last fall, ACEP commissioned a survey in which four in 10 respondents said they delayed or avoided seeking emergency care in the past two years because they were concerned about the cost of co-payments, co-insurance and deductibles.

It is likely that a growing number of Anthem members are getting hit with surprise medical bills after visiting the ER, Kliff wrote, citing the case of Anthem member Brittany Cloyd, who received a bill for $12,596 after visiting the ER at the Frankfort Regional Medical Center in July for what she thought was appendicitis, A ruptured appendix can be life-threatening, according to the Mayo Clinic. After appealing the bill, Anthem eliminated the charge, Kliff wrote.

In a statement to Kliff, the health insurer said, “Anthem’s goal is to ensure access to high-quality, affordable health care, and one of the ways to help achieve that goal is to encourage consumers to receive care in the most appropriate setting.” In a letter to Cloyd, Anthem listed stroke, heart attack and severe bleeding as examples of conditions that would be appropriate for ER care, Kliff wrote.

Indianapolis-based Anthem, which operates in 14 states, introduced the policy in 2015 in Kentucky and has since expanded it to Georgia, Indiana and Missouri, Andis Robeznieks reported for AMA Wire. The insurer announced that it would expand the policy to New Hampshire and Ohio this year.

Anthem, nation’s second-largest health insurer by enrollment with 40.2 million members, also does business in California, Colorado, Connecticut, Maine, Nevada, New York, Virginia and Wisconsin. On Wednesday, the company reported operating revenue of $22.4 billion in the fourth quarter of 2017, a 4.5 percent increase over the $21.5 billion it reported in the same period a year earlier. It also reported total 2017 revenue of $90 billion, up 6.1 percent from $84.9 billion in 2016.

Under the policy, patients are being asked to diagnose themselves, Kliff wrote. The ER policy is similar to those of some Medicaid programs, such as one in Indiana that requires patients to pay more if the state determines an ER visit is not urgent, she added. In Kentucky, the Trump administration approved a plan to charge Medicaid enrollees $20 for a first visit deemed to be inappropriate, $50 for the second visit and $75 for the third such visit, she reported.

Included in the Vox article was a notice from Anthem to its members in Missouri. “Save the ER for emergencies — or you’ll be responsible for the cost,” the notice says. “Going to the emergency room or calling 9-1-1 is always the way to go when it’s an emergency. And we’ve got you covered for those situations. But starting June 1, 2017, you’ll be responsible for ER costs when it’s NOT an emergency (this isn’t a change to your benefits plan).”

Anthem recommended members use urgent care centers on nights and weekends for such conditions as a cough or cold or back, joint, ear or sinus pain. It also advised patients to use retail health clinics for a rash, scrapes, minor burns or allergic reactions. The insurer offers two 24/7 consultation services: a nurse-advice telephone line and a service called LiveHealth Online that enables members to electronically ‘visit’ with a doctor to discuss common health conditions.

The American Medical Association in June asked Anthem to rescind the policy, Robeznieks reported, “citing a letter by AMA Executive Vice President and CEO James L. Madara, M.D., wrote in a letter to Anthem President and CEO Joseph Swedish. “Physicians know that patients and caregivers should never second guess their instincts that emergency care is needed, nor should they be expected to self-diagnose to determine whether, for example, chest pain is a heart attack or indigestion,” Madara wrote.

The AMA and ACEP note that Anthem’s policy goes against the prudent layperson standard, which is part of state and federal law under the Affordable Care Act, Robeznieks said.

In explaining this standard, ACEP said, “A ‘prudent layperson’ has been defined in the law as one who possesses an average knowledge of health and medicine, and the standard establishes the criteria that insurance coverage is based not on ultimate diagnosis, but on whether a prudent person might anticipate serious impairment to his or her health in an emergency situation.”

Regarding this issue, Anthem said it would not deny an ER claim based on the prudent layperson standard if it determined that any one of the following conditions applies:

The insurer’s policy could conflict with a law that requires hospitals to treat all patients, wrote Michael Hiltzik of the Los Angeles Times, citing the Emergency Medical Treatment and Labor Act of 1986 (EMTALA), which is designed to ensure the public’s access to emergency services regardless of ability to pay.

Here is a video produced by the American College of Emergency Physicians (ACEP) to protest the policy: