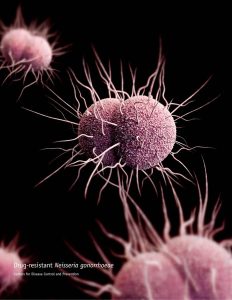 Alexander Fleming developed penicillin, the first antibiotic, in 1928. In less than a century, scientists have developed more than 130 other antibiotics — saving millions of lives, making surgery safer than ever, transforming medicine … and creating the huge new problem of antibiotic resistance that threatens to toss us back into the pre-antibiotic era.

Take gonorrhea for just one example: humans have gone from having no way to treat the disease in the 1920s to having effective antibiotics against it to now, when the “bacteria has developed resistance to nearly every drug used for treatment,” according to the CDC.

Panelists tackled this topic at the World Conference of Science Journalists in San Francisco last October. After outlining a bit of the history of antibiotics and how antibiotic resistance has accelerated in recent years, moderator Maryn McKenna and panelists Ramanan Laxminarayan, Kevin Outterson and Tara Smith discussed both the scale of resistance and how to address the problem.

“We’re using antibiotics as a substitute for public health rather than a complement to it,” said Laxminarayan during the discussion. And the biggest offenders are not even in public health per se — it’s their use in agriculture. The tweets from the session below provide highlights, graphs and links for further information for journalists looking to delve deeper into this topic.