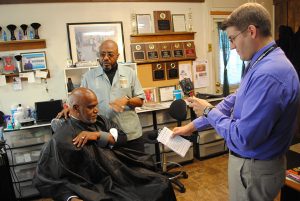 In the midst of a conference, sometimes the story is hard to see – or hear.

But for one AHCJ member, Avery Schneider of Western New York’s WBFO, a panel discussion on the social determinants of health helped ignite a story idea months later when contacted about a new health program in the area.

Schneider, who attended the conference in Orlando, acknowledged that he might have dismissed the pitch from a local spokesperson – if it wasn’t for something he had heard at the April conference’s panel on access and a similar program highlighted by one of the speakers.

Without the annual summit and its session on costs and disparities, he said “I’m honestly not sure if I would have seen the full potential” in the story that ended up unfolding on health care and haircuts months later.

The lead health and wellness reporter for the NPR member station, Schneider did not go into the panel with the story idea brewing, nor did it pop into his head as soon as the discussion ended. But it did arm him with crucial background information and some new insights, so he could see the potential when an emailed pitch arrived detailing a new effort to expand access to health care through local barber shops.

“The fusion of the two,” helped it all come together, Schneider wrote, detailing his experience for fellow AHCJ members.

It’s also kept Schneider, whose recent stories have tackled domestic violence, prenatal care and access to physical fitness and exercise options, on the hunt for more stories with an eye toward disparities and health care gaps.

You can read how he did it here.