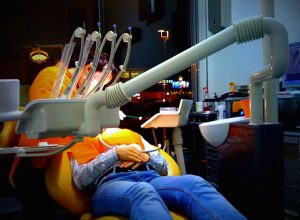 Many newly-minted dentists are burdened by the high cost of a dental education.

The average dental student graduates with more than $261,000 worth of debt, reporter Ramsey Touchberry told viewers in a recent story for University of Florida-based WUFT, citing figures from the American Dental Education Association.

Now some Florida legislators are pushing for legislation that would create a loan forgiveness program to help recent dental school graduates pay off those bills. At the same time the measure would get more care to poor and underserved communities in the state, the legislators say.

Participating dentists could get up to $50,000 worth of loans forgiven annually, for up to five years, Touchberry reported in his story.

University of Florida dental student Ioanna Borissova, who said she is shouldering between $100,000 and $150,000, told Touchberry that the loan forgiveness program would make it easier for newly graduated dentists to “have the ability to practice and give back and do the work they love without having any stress about debt.”

But the legislation faces an uncertain future. A similar measure was passed by the state house and senate in 2016, only to be vetoed by Florida Gov. Rick Scott.

In his veto letter, Scott said he agreed that “maintaining good oral health is integral to the overall health of Florida families.” But he said the bill held too much potential for abuse of public dollars, Jim Rosica of Florida Politics reported.

This time around, legislators have lowered the maximum yearly repayment rate from $100,000 to $50,000 in hopes of the governor approving it, Touchberry told viewers in his Dec. 1 piece.

“We think we can demonstrate that the state actually does better when people get adequate healthcare, particularly dental care,” said one of the bill’s authors, State Senator Aaron Bean explained in the story. “So we’re working on a model now that will show why it’s in the state’s best interest to do this.”

Reporters: Is your state looking at loan forgiveness as a way of attracting more dental providers to underserved communities?