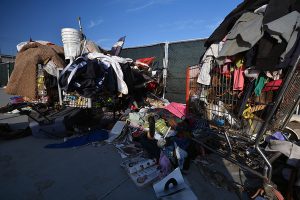 During a two-week U.S. fact-finding tour, Philip Alston, the United Nations special rapporteur on extreme poverty and human rights, said he observed scenes of suffering from coast to coast: in homeless encampments in California, in storm-ravaged enclaves in Puerto Rico, and in marginalized communities of the deep South and West Virginia.

A shortage of healthcare, infrastructure and sanitation services in low-income and minority communities are taking a serious toll, Alston said during a Dec. 15 press conference in Washington, D.C., at the conclusion of the tour.

“The U.S. infant mortality rate is the highest in the developed world,” said Alston, an Australian who is a law professor at New York University. “Americans can expect to live shorter and sicker lives than other rich democracies. Neglected tropical diseases are coming back, (such as) hookworm in Alabama in the 21st century.”

Alston, who is preparing a report for the United Nations on his findings, embarked upon the journey to determine whether extreme poverty in America represents a human rights threat. International human rights laws recognize rights such as the right to health care and to an adequate standard of living as basic human rights.

United States law does not, Alston acknowledged, who added that this denial should not eliminate responsibility in one of the world’s richest nations.

Alston noted that some of the problems he investigated on the tour have been many years in the making.

However, he predicted the impact of Trump administration policies, including the Republican-led tax reform package working its way through Congress, would severely exacerbate inequality in America.

“The social safety net that currently exists … is riddled with holes,” Alston warned. “If the cuts that are anticipated are made, it will essentially be blown apart.”

The various state officials he met on his trip expressed particular worries about the potential for cuts to Medicaid.

“They all used the word ‘devastating’ to describe the impact,” he said.

Medicaid provides health coverage for more than 74 million poor Americans. Medicaid mandates dental services for children., but adult dental benefits are treated as an optional part of the program.

On his tour, Alston said he saw troubling evidence of the widespread shortage of dental care for poor adults. Untreated disease results in suffering and stigma, he said and contributes to the continuing cycle of poverty.

“If you have lousy teeth, you can’t get a job,” he noted.

In a written statement summarizing his findings, Alston had more to say about the lack of national attention to oral health inequalities.

“Poor oral hygiene and disfiguring dental profiles lead to unemployability in many jobs, being shunned in the community, and being unable to function effectively,” he wrote. The lack of dental services for America’s poor, combined with the pain and depersonalization of oral disease, “fundamentally affect the human dignity and ultimately the civil rights of the persons concerned.”

Alston’s final report is expected to be available in the spring of 2018 and presented to the United Nations Human Rights Council in Geneva in June.