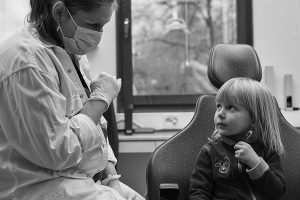 A small child is taken to a dental office for care. He is placed under sedation for the treatment of advanced tooth decay. He never wakes up.

The case, outlined in a recent “Ethics Rounds” commentary for the journal Pediatrics, bears a heartbreaking similarity to stories that sometimes lead the local news.

Tooth decay remains the most prevalent chronic health problem of children in the United States, and too often the decay becomes extensive before it receives attention. An estimated 100,000 to 250,000 sedations for pediatric dental procedures are performed annually in the United States, the contributing authors noted.

No one knows exactly how often these procedures go wrong or why. There is no mandated reporting system for such adverse events. The details that trickle out via news accounts and lawsuits do not go nearly far enough to answer the questions – or to develop best practices to help prevent new tragedies from occurring, the authors write.

In the case highlighted outlined in the journal, a 4-year-old boy is referred to a pediatric dentist by the family dentist for treatment under anesthesia because he suffers from serious, painful decay and behavioral issues would make his care otherwise difficult. The pediatric dentist who sees him has a license to provide moderate sedation, and his office staff is certified in advanced pediatric life support.

However, at the conclusion of the procedure, the child stops breathing, and 911 is called. The staff initiates CPR. These efforts failed, and the child is pronounced dead at the hospital.

“As a matter of medical ethics and health policy, how should we respond to such a case?” the authors ask. “Are there ways to prevent such deaths in the future?”

The presence of an anesthesiologist or following guidelines issued by the Pediatric Sedation Research Consortium might have prevented the death, observes Helen Lee, a University of Illinois at Chicago physician, in her section of the commentary. Treatment at an ambulatory surgery center instead of a dental office also might have made a difference.

Adverse events have been reported with all of the medications typically used for moderate sedation, Lee notes, yet too many questions remain unanswered about these cases to discover the larger patterns that might underlie them.

“We should be asking which systems-level factors put patients at greatest risk for adverse events,” she writes. “Greater details than what are provided in a media report would enable the identification of systems-level deficiencies and directed solutions. Ultimately, effective solutions cannot be proposed until root-cause analyses of all adverse events are performed.”

But Lee and the other authors also conclude that earlier intervention in the progression of childhood tooth decay would go a long way toward making treatment under anesthesia unnecessary in many cases.

Early childhood caries, the common disease that caused the boy’s problems, might have been prevented with parent education and regular home hygiene, plus better nutrition and access to professionally applied fluoride varnish. Decay also might have been stopped at an earlier stage by painting silver diamine fluoride on the child’s teeth.

Wylie Burke and Erika Blacksher, researchers from the University of Washington, in their section of the commentary concluded: “Just as no child should go hungry, no child should suffer a mouthful of pain for the lack of simple protective measures.”