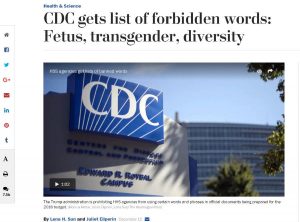 Photo: www.washingtonpost.comThis Washington Post’s story cited CDC staff who acknowledged that the agency was directed not to use certain words in fiscal 2018 budget documents.

A Washington Post article listing words reportedly prohibited for use by the U.S. Centers for Disease Control and Prevention in budget documents has some scientists worried, even as the agency’s director tried to smooth over the controversy.

A few days after the article appeared on December 15, U.S. health officials confirmed to the Post that they had sought to avoid using certain words, but insisted they were not outright banned. It is unclear which department or agency issued the initial directive, and the motive for the list is in dispute.

Citing a CDC analyst briefed about the list, as well as other CDC officials, the Post had reported that senior officials at the nation’s public health agency were told not to use the following seven words in documents developed for the next fiscal year: “vulnerable,” “entitlement,” “diversity,” “transgender,” “fetus,” “evidence-based” and “science-based.”

The CDC’s budget documents would be presented for inclusion in President Donald Trump’s spending blueprint, reflecting the executive branch’s budget priorities. The White House typically releases its budget in February for the next fiscal year starting in October. Congress is tasked with appropriating the funds.

“In some instances, the analysts were given alternative phrases. Instead of “science-based” or “evidence-based,” the suggested phrase is “CDC bases its recommendations on science in consideration with community standards and wishes,” the analyst told the Post. In other instances, “no replacement words were immediately offered,” the Post’s health correspondent Lena Sun and White House correspondent Juliet Eilperin wrote.

Matt Lloyd, a spokesman for the Department of Health and Human Services, which oversees the CDC, told the Post the CDC “will continue to use the best scientific evidence available to improve the health of all Americans” and “also strongly encourages the use of outcome and evidence data in program evaluations and budget decisions.”

The initial story quickly became one of the most-read articles on the Post’s website over the past weekend. In response, CDC Director Brenda Fitzgerald posted six tweets on December 17 to insist there was no ban. “I want to assure you there are no banned words at CDC. We will continue to talk about all our important public health programs,” said Fitzgerald, who was appointed by Trump.

Felice J. Freyer, AHCJ’s vice president and chair of its Right to Know Committee, said that the CDC’s word choices have public health implications, because they affect the public’s trust. In an emergency, such as a flu pandemic, public safety will depend on citizens’ willingness to believe and heed the CDC’s instructions, she said.

“I hope the CDC director will make a forceful statement assuring Americans that the scientists and experts at the CDC are not merely allowed — but required — to employ clear, meaningful words that convey the truth,” Freyer said.

In its coverage, The New York Times reported that it had confirmed with officials some of the Post’s report, saying “although a few suggested that the proposal was not so much a ban on words but recommendations to avoid some language to ease the path toward budget approval by Republicans.”

In an email to the Times, HHS spokesman Lloyd said: “The assertion that HHS has ‘banned words’ is a complete mischaracterization” of the budget discussions.

“The news set off an uproar among advocacy groups and some Democratic officials, who denounced any efforts to muzzle federal agencies or censor their language,” the Times’ Sheila Kaplan and Donald McNeil wrote.

A former CDC official told them that some agency staff “were upset because the purported ban suggested that their work was being politicized,” adding that others suggested using muted language might make sense when seeking funding on what could be viewed as controversial topics.

U.S. Rep. Rosa DeLauro (D-Conn.), who is the ranking Democratic on the House’s Labor, Health and Human Services, and Education Appropriations Subcommittee, asked HHS on December 18 for details about the list.

“I am calling on the Department of Health and Human Services to clarify any recent directives to the CDC, as well as other federal health agencies. Political appointees should not be censoring or interfering with the work that our scientists and public health experts do every day,” DeLauro said in a statement emailed to reporters.

Other lawmakers followed suit, the Post reported, including top Senate Democrats and some Republicans. U.S. Rep. Tom Cole (R-Okla.), who heads the House health appropriations subcommittee told the Post that while he would talk to the CDC chief, it appeared the directive was motivated  “more [by] the bureaucracy trying to react to what they think the new administration wants to hear.”

Politico, citing sources familiar with the decision, reported that HHS selectively disclosed comments related to “a Trump administration proposal to reduce federal regulations for religious and faith-based groups that could affect access to abortion and care for transgender patients,” A department official told Politico it was working through the submissions.

1 thought on “CDC’s directive to avoid using “transgender,” and other words, triggers concerns”