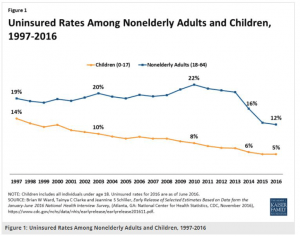 Data compiled by the Kaiser Family Foundation show that when the Children’s Health Insurance Program was enacted in 1997, the uninsured rate among children (those individuals under age 18) was 14 percent and that it reached an all-time low of 5 percent last year.

Officials in 12 states may start sending letters to parents this week, alerting families that funding for the Children’s Health Insurance Program is running out, according to reporting by Colby Itkowitz and Sandhya Somashekhar in The Washington Post. In Colorado, letters went out in the mail today.

“Many states have enough money to keep their individual programs afloat for at least a few months, but five could run out in late December if lawmakers do not act,” Itkowitz and Somashekhar wrote. “Others will start to exhaust resources the following month.”

In October, Rachana Pradhan and Sarah Frostenson reported in Politico that six states and the District of Columbia would run out of coverage by next month. Those states are Arizona, Minnesota, New York, Ohio, Oregon and Washington.

In fiscal 2016, CHIP provided health insurance coverage to 8.9 million children nationwide, according to a September report by the Kaiser Family Foundation, “Current Status of State Planning for the Future of CHIP.” In some states, CHIP covers pregnant women. In those states, 370,000 women have health insurance through CHIP.

Most of these parents and pregnant women enrolled in CHIP are unaware that on Sept. 30, Congress missed the deadline to extend the funding, endangering their coverage, Itkowitz and Somashekhar reported.

On Nov. 3, the U.S. House of Representatives passed a bill to fund CHIP for five years, but the bill is unlikely to get a vote in the U.S. Senate, Nathaniel Weixel reported for The Hill.

Passed in 1997, CHIP (also called SCHIP for State Children’s Health Insurance Program) offers low-cost health coverage to children of families that earn too much to qualify for Medicaid but not enough to afford private health insurance. CHIP and Medicaid expansion under the Affordable Care Act have helped reduce the rate of uninsured individuals under age 18 from 14 percent in 1997 to 5 percent last year, KFF reported.

Almost all states provide coverage for children up to at least 200 percent of the federal poverty level (FPL), according to Medicaid.gov. While benefits vary among states, all states provide coverage that includes routine check-ups and doctor visits, immunizations, prescription drugs, dental and vision care, inpatient and outpatient hospital care, emergency services, laboratory and X-rays.

If CHIP funding runs out, many children and pregnant women would be covered under Medicaid, wrote Pradhan and Frostenson. “But roughly 4 million CHIP enrollees live in states whose programs are not linked to Medicaid, so those enrollees are at risk of losing coverage. In certain states, pregnant women could also lose benefits,” they said. Their reporting includes a grid map showing which states will run out of CHIP funds and when. The data are based on their reporting and numbers from the Medicaid and CHIP Payment and Access Commission.

The Kaiser Family Foundation and Health Management Associates surveyed state Medicaid officials in the summer. They asked the officials about their plans for CHIP if Congress did not extend funding. Here’s a report on that survey: “Current Status of State Planning for the Future of CHIP.” My colleague, Mary Otto, covered this topic for AHCJ in October.

For more information, see this list of the number of CHIP enrollees by state from KFF: “Total Number of Children Ever Enrolled in CHIP Annually.”

This fact sheet from Families USA says Medicaid and CHIP cover 39 percent of the children, including most children with special needs, children of color and children living in rural communities.

This July 2017 report, Federal CHIP Funding: When Will States Exhaust Allotments? (PDF), from the Medicaid and CHIP Payment and Access Commission, was revised in October to show that four states and the District of Columbia will exhaust CHIP funds by the end of December. In addition, 27 will do so in the first quarter of 2018, 19 in the second quarter and one (Wyoming) will have no CHIP funds by the third quarter next year.