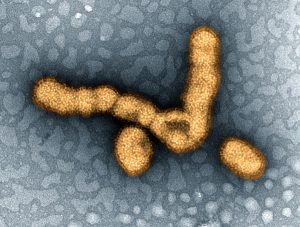 Population explosion, ease of travel and factory farming of animals are all reasons that a flu pandemic – a fast-spreading, contagious flu with high mortality – is inevitable, public health experts said during an Oct. 10 AHCJ webcast on pandemic preparedness.

“What is the possibility of a pandemic? It’s absolute. It will happen,” said webcast participant Michael Osterholm, director of the Center for Infectious Disease Research and Policy at the University of Minnesota. “Are we ready? The bottom line is that we are not.”

When such a pandemic could occur, no one can say, but the flu virus that most worries public health officials is named H7N9 (H and N represent the type of protein covering a flu virus). H7N9 has been circulating in China since 2013. Each flu season, H7N9 has become more contagious and more dangerous. In the past four years, about 1,557 people have been infected with H7N9 and about 40 percent have died. The spread of H7N9 has so far been limited to people handling live poultry, but a June report in the scientific journal PLOS concluded that the virus might just be a few mutations away from becoming more dangerous to the broader public.

“The virus would only require a small amount of change to potentially be more devastating in humans,” Sonja J. Olsen, deputy chief, Epidemiology and Prevention Branch, Centers for Disease Control and Prevention, told AHCJ webcast participants. Her slides outlining the CDC’s surveillance of H7N9 and all pandemic potential flu viruses can be found here.

The most recent pandemic to strike the planet was the outbreak of H1N1, or the swine flu, in 2009. The flu was first reported in Mexico and quickly spread to the rest of the world. Ultimately, about a quarter of the planet was infected with H1N1. At first, the swine flu was reported to have a mortality rate of about 8 percent, but fortunately, the virus proved not to be so lethal. In the U.S., about 60.8 million Americans contracted swine flu, but just 12,469 died.

Public health experts worry most about pandemic flu potential because the virus is so contagious and it can lead to complications like pneumonia. Next year will be the 100th anniversary of the 1918 flu, called the Spanish flu because it was first reported in that country. Around 25 million to 100 million people worldwide died in the Spanish flu outbreak.

The 2009 H1N1 outbreak caused public health leaders to produce multiple papers on lessons learned from the pandemic to help leaders prepare roadmaps for preparedness in the future. But gaps remain.

Osterholm said that many life-saving drugs and equipment, like ventilators, used daily in hospitals are produced in China, India and Puerto Rico. A flu pandemic would be sure to cause a disruption in the supply of these products, leaving hospitals with challenges in treating patients sick with the flu, or other diseases. (See more about medical supply gaps in his slide presentation here.)

“Look what is happening in Puerto Rico, we already seeing a shortage of saline bags,” he said.

The Trump administration also doesn’t have the leadership team in place to handle such a disruption to the health care system, Osterholm said.

“There are those in HHS (the Health and Human Services department) that have a real expertise in [pandemics] but this will take a big team and we just aren’t prepared for a major 1918 influenza-type pandemic,” he said.

Olsen agreed that the U.S. “has a ways to go,” and that a pandemic “will be tough on any country. A global aspect of pandemic means that it isn’t to just our government that needs to be ready but leaders in other countries, and there are a lot of gaps.”

For journalists thinking about how to bring a story about pandemics and preparedness to their communities, Osterholm suggests reporters look into why the U.S. isn’t investing more in a vaccine that could prevent all flus, not just pandemic flus, from spreading. He also suggests reporters talk to their local hospitals to learn how prepared they are to handle a sudden surge of patients, and a sudden shortage of supplies in the event of a flu pandemic. Olsen suggested reporters consider the global angle of pandemics, and the gaps in flu surveillance and leadership.