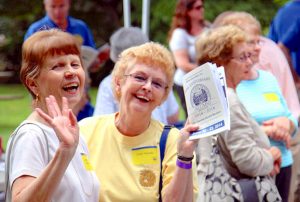 There’s some good news for post-menopausal women: many of them report becoming happier later in life, especially in the years between 50 and 70, according to new research from Australia.

A 20-year longitudinal study found that negative mood and depressive symptoms decreased significantly as women transition from mid-life (ages 50 to 64) to later life (65 and older). For many women, this appears to be related to the positivity around more “me” time as they wind down from full-time work and family responsibilities.

The women in this study reported feeling more patient, less tense, and tend to be less withdrawn as they entered their sixties, according to lead author Katherine Campbell, a psychologist at the University of Melbourne. By this age, menopausal symptoms have largely disappeared, and most have accepted and embraced the aging process, she concluded.

The study published in the August issue of Maturitas followed women for 20 years from the early 1990s. Over two decades, researchers looked at negative mood and depressive symptoms from the Women’s Healthy Aging Project covering biological, lifestyle, and health factors. Of 400 women between ages 45 and 55 who began the study in 1990, more than half – 252 – were still involved 20 years later. At a mean age of 60, 22.6 percent reported mild or moderate symptoms of depression, compared with 15.5 percent of women with an average age of 70 years.

Happiness and well-being are thought to take a U-shaped curve throughout life, dipping down in middle age before inching up again later in old age, Dilip Jeste, a geriatric psychiatrist and director of the Center on Healthy Aging at the University of California, San Diego, said in this Time article.

Supporting research has found that older adults are among the happiest among us And apparently it’s true throughout the world; this Psychology Today article cites research in the United Kingdom that also found more positive outlooks in later years. Other studies have tracked a similar decline in depressive symptoms as people age but found depression and anxiety remain more prevalent in older women than men.

Depression has been linked to increased risk for dementia, and premature death, and there is a need for effective intervention and prevention strategies, as this MedPage Today article noted.

According to the National Council on Aging, depression affects 7 million older Americans. However, two-thirds of older adults with mental health problems, (which include depression and anxiety disorders), do not receive the treatment they need. Untreated mental health problems among older adults are associated with poor health outcomes, higher health care utilization, increased complexity of the course and prognosis of many illnesses, increased disability and impairment, compromised quality of life, increased caregiver stress, increased mortality and a higher risk of suicide.

Even so, we should not accept depression as a normal part of aging, writes James Ellison, M.D., in Psychiatric Times. He said many depressive symptoms go unrecognized, and well-intentioned clinicians may focus on symptoms of dementia rather than depression. Psychotherapy and anti-depressants are some usual first lines of defense. Ellison advises prescribing physicians to use caution, as some medications have harmful side effects, such as arrhythmia and bleeding.

Medicare pays for some mental health services, including an annual depression screening. Part B covers limited outpatient psychiatric services, individual counseling or group psychotherapy. However, it often is not enough. Inpatient benefits (paid under part A) are limited to a lifetime cap of 190 days. In addition, beneficiaries are liable for a 20 percent copay (or coinsurance in some cases) – something often out of financial reach for many older adults. Moreover, finding a provider who accepts Medicare remains a challenge for many older adults.