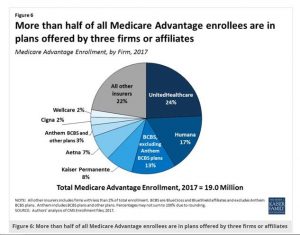 A recently unsealed whistleblower lawsuit claims that UnitedHealthcare concealed from federal officials hundreds of complaints of enrollment fraud and other misconduct in its Medicare Advantage program.

Brought by two UnitedHealthcare sales professionals in Wisconsin, this suit is worth watching because it is the third in recent months that whistleblowers have brought using knowledge they gained while working for Minnetonka, Minn.-based health insurance giant.

As the nation’s largest Medicare Advantage (MA) insurer, UnitedHealthcare has 4.6 million members, which is 24 percent of the total MA enrollment nationwide, according to the Medicare Advantage 2017 Spotlight: Enrollment Market Update, which the Kaiser Family Foundation (KFF) published June 6.

The sales professionals at United Healthcare Services who brought the most recent suit are sales agent James Mlaker of Milwaukee, and sales manager David Jurczyk of Waterford, Wis., according to reporting by Fred Schulte for Kaiser Health News and the Center for Public Integrity. The salesmen accused UnitedHealthcare Services of keeping two sets of books to hide complaints from members about its services, and charged that the company intentionally was ineffective at investigating sales staff misconduct, Schulte wrote. The suit, filed in October, unsealed July 25.

The salesmen in the lawsuit said that at least one sales agent forged signatures on enrollment forms, and another promised iPads to senior citizens who agreed to enroll in UnitedHealthcare’s Medicare Advantage plan and stay on the plan for six months, Schulte reported. Asked for comment on the suit, a spokesman for UnitedHealthcare said the company rejects the allegations.

Despite this suit and others explained below, Bruce Japsen reported for Forbes that UnitedHealthcare’s Medicare Advantage business continues to grow. Japsen quoted UnitedHealth Group President Dave Wichmann as saying, “Our Medicare Advantage business continues to benefit from strong consumer retention reflecting seniors’ positive experience and the clear economic value of our offerings.”

In their report for KFF, researchers Gretchen Jacobson, Anthony Damico, Tricia Neuman and Marsha Gold confirmed Japsen’s findings. “Enrollment in UnitedHealthcare’s plans grew more than any other firm, increasing by more than 800,000 beneficiaries between 2016 and 2017, and the firm’s share of the Medicare Advantage market increased from 21 percent in 2016 to 24 percent in 2017,” they wrote.

Since 2012, Schulte has covered how health insurers have developed a track record of overbilling the government for Medicare Advantage plans. Before joining Kaiser Health News last year, Schulte wrote for the Center for Public Integrity. We have covered his work here, here and here. In 2014, Schulte and reporters at CPI produced a series of articles called, The Medicare Advantage Money Grab. Since those stories were published, two separate government reports have confirmed CPI’s findings.

In his most recent article, Schulte reported that the Wisconsin case is one of several that health insurers are facing under the False Claims Act. At least a half dozen whistleblower suits have become public since 2014, he wrote.

One month later, Schulte reported that the Department of Justice intervened in another Medicare Advantage case, this one was brought by whistleblower James Swoben in 2009. Within days, the DOJ sought to combine Swoben’s case with that of Poehling, he wrote.

A spokesman for UnitedHealthcare denied any wrongdoing.