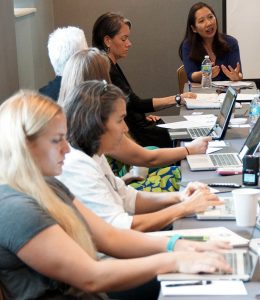 Photo: Jeff Porter/AHCJAHCJ Regional Fellows hear from Dr. Leana Wen, Baltimore’s health commissioner, during their kickoff event in Baltimore. The focus of the kickoff was social determinants and health disparities.

A flyer floating along the sidewalk on the way to AHCJ’s 2017-18 Regional Fellows meeting in Baltimore last month seemed to preview the challenges and discussions for the days ahead.

“Cash for diabetic test strips,” it read. Instead of patients using the strips to test their blood sugar, they were being encouraged instead to turn in their unopened boxes “and get cash on the spot!!”

It was an example of the health hurdles facing many residents here that nearly a dozen fellows from the Mid-Atlantic region would grapple with during their July gathering in Maryland’s biggest city.

Even the streets exemplified the gaps that remain, with luxuriously appointed law offices just doors down from boarded-up buildings. The diabetes flyer was found steps from the AHCJ meeting held near Johns Hopkins Medical Center – one of the nation’s most well-known institutions. It wasn’t far from other struggling areas.

During the meeting, the fellows learned about a range of determinants impacting health not only in Baltimore but across the nation, as well as strategies and resources to report about them.

In an overview by Dr. Leana Wen, Baltimore’s health commissioner, they heard about the city’s various dichotomies and efforts that Wen, who worked as an emergency room physician, has tried to impart to lessen the divide on a range of health issues, from eyesight to addiction.

Her department has focused on flexibility and programs that aim for a direct impact, such as proving free classes to children in need. “That’s a solvable problem,” said Wen, a speaker at AHCJ’s 2016 annual conference.

The fellows also heard from Darrell Gaskin, a health policy professor and head of the Hopkins Center for Health Disparities Solutions at JHU’s Bloomberg School of Public Health, and Gary Puckrein, chief executive of the National Minority Quality Forum.

Journalists trying to understand such disparities health need to keep in mind that “place matters,” Gaskin said, adding “race and place are related” since decades of policies from finance to housing have had lasting effects for generations.

Rachel Godsil, co-founder of the Perception Institute and a professor at Rutgers University, offered background on social science research related to bias. Fellows saw for themselves efforts to address health disparities during visits to the city-operated Druid Health Clinic and Safe Streets Park Heights, a public health program aimed at reducing violence.

Supported by AHCJ’s Center for Excellence in Health Care Journalism, the AHCJ Regional Health Journalism Fellowship offers a small group setting for journalists to deepen their coverage of critical health issues on a local level. The 2017-18 class focused on the Mid-Atlantic region and includes journalists from Maryland, Kentucky, North Carolina, Virginia and West Virginia.