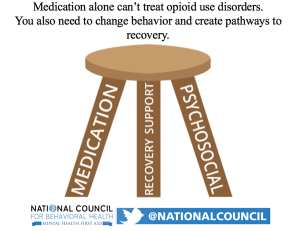 Last week’s AHCJ webinar about responsible, accurate reporting on addiction and recovery issues pointed out the importance of sensitive, accurate coverage of the issue and ways in which journalists can improve their coverage.

AHCJ members who missed the live webcast can still watch the Aug. 24 presentation by speaker Tom Hill, M.S.W., vice president of addiction and recovery at the National Council for Behavioral Health.

Hill emphasized that addiction is a chronic brain disease (not unlike other chronic diseases, such as diabetes or heart disease) that requires long-term management. Addiction is neither an acute condition nor a chronic moral failing, said Hill, who highlighted the three specific areas of the brain affected by addiction: areas governing inhibitory control, motivation/drive and memory/drive.

Hill described a so-called “three-legged stool” approach addiction treatment and recovery. The first, pharmacotherapy, is not simply “trading” one addiction (the medication) for another as some incorrectly believe, he emphasized. Only three medications are available to treat addiction, but all of them directly treat the brain abnormalities involved in addiction. The other two legs of the stool are psychosocial support and recovery support, including the need build up a patient’s “recovery capital”

Hill also listed three of the most significant weaknesses he sees in reporting about addiction. Too much reporting often focuses only on addiction itself and its problems and effects, without complementary reporting on treatment and recovery. Such a constant focus on the negatives of the problem neglect to inform people about the treatment available and the fact that long-term recovery is possible.

Journalists should refer to the person or people being discussed first, followed by the condition they have. They should not be defined by their illness, which means scrapping words such as “alcoholic” and “addict” from reporting altogether. “Person-first language” (described in this recent NPR story about updates to the AP Stylebook and this AHCJ post) also means referring to someone as a “person with an addiction” instead of “addicted person.” While the change may seem clunky or wordy for journalists focused on succinctness and clarity, person-first language avoids the dehumanization of reducing a person to their disease, a phenomenon that can increase stigma and misunderstanding of the condition, Hill argued.

Finally, the imagery and other language used for stories about addiction and recovery should avoid the strong negative connotations that can increase stigma, he said. This doesn’t mean sugarcoating the reality of how destructive addiction is, but means avoiding terms such as “junkie” and refraining from stock photos of headless arms shooting up. It is possible — and necessary — for journalists to report on the reality of addiction without compromising respect for those who have the disease.

Hill discusses all these topics and others in more detail in the Aug. 24 webcast, so if you have not checked it out, add it to your watch list!