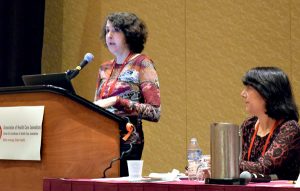 Photo: Pia Christensen/AHCJEmily Gurnon, an editor with PBS Next Avenue, urges attendees to do research on the publications they pitch to. Michele Cohen Marill (right), an independent journalist in Atlanta, moderated the session.

Ah, the freelance life. Sleeping until noon. Working in your pajamas. Picking and choosing just the right assignments that appeal to and massage your fragile ego…

As anyone who has done it can attest, being a freelance journalist is hard. And complicated. And just like staff jobs, there are rules, protocols, and methodologies to follow. But unlike staffers who focus on one media outlet’s culture, freelancers must adopt different strategies for each publication or client.

Although it was one of the last sessions at Health Journalism 2017, the room for the Freelance Hacks panel was filled with journalists and editors looking to up their freelance game. Moderator Michelle Cohen Marill, an independent journalist from Atlanta, shared the results of the freelancer survey you may recall completing several months back.

For the most part, freelancers:

Panelists offered dozens of helpful tips and plenty of sound advice — including several ideas that were new to even the most experienced freelancers in the room.

Some of the techniques she uses are easier to set up prior to writing on anything controversial, which “could arouse some nut case out there.”

She related tales of trolling and threats by a disgruntled, vocal anti-vaccine community.  Haelle uses Google Voice as her main phone number, and only gives her cell number out to trusted family and friends. It helps to protect her privacy. Additionally, she set up a separate email for PR people, and tries not to use her personal email for business. She also rents a post office box — another tactic she regrets delaying. While it may sound a bit paranoid, there are crazy people out there and you don’t want them to know where you live, she explained.

Whether you’re new to the freelance world or an established independent, your professional image matters, Haelle said. “You’re more likely to get higher paying assignments and more assignments.” She suggested:

Additionally, Haelle saves all of her important files in the cloud, through Dropbox. “If your computer crashes while on deadline, at least you can continue working.”

Brooke Borel, an independent journalist from Brooklyn, N.Y., and contributor to Popular Science, began freelancing full time nine years ago, after being laid off as a fact-checker for a major publication. Building editorial relationships on the side while at her full-time job became a lifeline after the layoff; it allowed her to send a “mayday” to editors who already knew her and to get assignments almost immediately.

To supplement her income, she also teaches and has written two books. “I feel a little more secure now,” she said. “Although, we’re never totally secure in this world of freelancing.”

Borel writes mostly on science, agriculture, and the environment, specifically genetic engineering and biotechnology. She suggested building up several, non-overlapping beats, so if one area dries up, there will still be some work available elsewhere. Building an expertise has another advantage: “I have editors coming to me now asking for pieces.” That’s less time and effort spent pitching. She also advised diversifying the media you write for and other activities, such as books, magazines, digital, speaking on panels, doing workshops, and even teaching.

Regardless of medium, you have to advocate for yourself, both in contracts and in money she said. While you may have great relationships with some editors, “no one is going to care about your career as much as you do.”

Don’t just read the contracts, but ask for changes. That’s especially true when it comes to copyright clauses. Try to make sure you own the copyright, said Borel. That hit home when she saw a magazine at the supermarket checkout which had repurposed articles she previously wrote for them. Thanks to smart early negotiating, Borel owned the copyright to those articles and was further compensated for their use.

“Don’t be afraid to negotiate when it comes to money or contracts,” she said. Even an extra $50 or $100 per story adds up over time.

When it comes to pitching stories, NextAvenue.org’s Emily Gurnon, senior content editor, health and caregiving, said it really comes down to the basics: do your homework about the publication and see what they’ve recently written about, as well as what they don’t cover. Don’t pitch an idea that was recently done, or one that’s way outside the scope of coverage, like a pregnancy story for a 50+ audience.

It should go without saying, but pay attention to details, especially grammar and spelling. Make it easy on the editor. “Show me you’re a professional who takes yourself and my time seriously,” she said.

Gurnon thinks it’s fine to ask about money up front, so no one’s time is wasted. While most freelance contracts are standardized and often come out of the legal department, there is often some flexibility, especially if you’re known to the editor or write for the publication regularly.

Most importantly? “Write to length,” Gurnon said. Don’t hand in a 2,000-word story when the assignment was for 800. “That’s an editor’s nightmare.”

Additionally, write what you are assigned to write. If the angle changes based on new research or interviews, let the editor know as soon as possible, and don’t wait until the day the story is due. And of course, you have to meet the deadline.

Meet the deadline. Of course. Freelancer or staffer, that mantra is etched into our DNA.