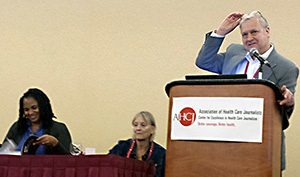 Doctors care for the patients, said Gabrielle Jackson, a licensed social worker for accountable care organization Aledade, but social workers provide important support, such as ensuring that a patient given a prescription can obtain it and then actually takes it.

“When people think about social work they think about crisis,” Jackson told AHCJ members. But after the immediate crisis is handled, social workers have to then think about larger issues that can impact a patient’s health and life to be more proactive.

This is especially important given the substantial role that primary care doctors are playing in mental health issues, according to Mary Ann Burg, a professor of social work at the University of Central Florida in Orlando.

“The social worker finds out about the patient’s experiences, how they’re living” as well as any barriers in their life that affect health, she told members. “If you don’t do that, nothing good’s going to happen.”

“If they can’t pay for medication or they can’t get to it … or they don’t have the support at home to take that medication, they ain’t taking the medication,” Burg added.

Both panelists argued that social workers should be seen as equal partners in the health care space, even if their work is not reimbursed as highly as other providers, such as psychiatrists. At the same time, the cost difference can make their services a good sell for clinics looking to get better value in care.

Jackson and Burg urged journalists to find ways to tell the stories of people who need and have benefited from social worker interventions in care, noting that these dire struggles often are not seen by the rest of America.

“It’s hidden because people don’t want to know about it,” Burg noted.

Panel moderator Bryan Thompson, a rural health and agriculture reporter for Kansas News Service, talked about his coverage of the issue, such as the story of one elderly woman who began using a hole in the floor for a toilet after her water was turned off. She eventually was relocated to subsidized elderly housing, which dramatically improved her life, he said.

You can hear his interviews:

Such successes, however, do not come quickly and often require ongoing efforts by professionals such as social workers, who spend each day pushing to coordinate care and other resources, Jackson said.

“We can’t fix everything,” she said. “We do have value, even if we can’t be the … superhero every day.”

See tweets from this panel for more information.