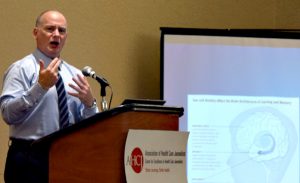 Photo: Pia Christensen/AHCJSt. Petersburg-based pediatric psychiatrist Mark Cavitt said that the effects of chronic stress are more likely for those exposed to a greater number of adverse childhood events.

Science is increasingly clear that constant exposure to stress in youth affects their bodies in ways that alters their brains and changes their response systems, especially younger children exposed more challenges, experts told attendees of a Health Journalism 2017 panel in Orlando.

Panelists noted that stress, even in young children, can be good. It helps spark protective reactions to protect the body from harm – say, crossing a busy street. But studies have shown the constant bombardment of stressful situations in kids can have a serious, cumulative impact.

“Constantly having that stress all the time – your body is not made for that at continuous levels,” said Melissa Bright, an assistant research scientist at the University of Florida’s Institute for Child Health Policy.

Dr. Mark Cavitt, who oversees pediatric psychiatry services at Johns Hopkins All Children’s Hospital in St. Petersburg, Fla., told members at AHCJ’s annual conference that the effects are more likely for those exposed to a greater number of adverse childhood events, or ACEs.

Panelists highlighted how childhood traumas can change neuron connections, affect DNA, and functionally change key areas of the brain, including the prefrontal cortex, hippocampus, amygdala. It also changes so-called feedback loops affecting children’s reactions. For example, they may make them respond slower in certain times of crisis, or faster in situations that don’t normally warrant it, the experts said. 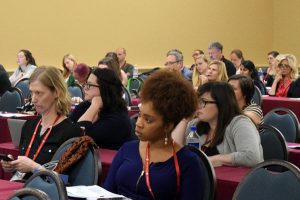 “If the brain’s being bathed in stress hormones chronically, fewer dendritic connections are formed, fewer pathways are formed, circuitries don’t perform as well, memory – everything you can think about in brain function is going to be altered,” Cavitt said.

The wear of chronic unpredictable toxic stress, or CUTS, can continue for a lifetime, they said. In addition to neurological functions, immune response also gets disrupted, making affected children more likely to get short-term illnesses as well as chronic conditions.

Caring for such patients can also take its toll on providers who work long days in communities where problems seem exponential and successes seem too few, said Dr. Daniel Taylor, who treats pediatric patients at St. Christopher’s Hospital for Children.

“It’s overwhelming, it’s depressing,” Taylor said. “There’s a hopelessness is in the air just like there hopelessness in a lot of families that we serve.”

Cavitt, however, said providers have been successful with some techniques that allow them to counteract stress, at least for a few seconds at a time. For example, in his clinic patients take five deep, slow breaths, he said. And while that seemingly simple intervention can boost an individual, similar efforts need to be scaled up and enacted at a larger, public health level, he added.

“We can break these cycles,” Cavitt told members. “We can have positive effects.”

Taylor also urged journalists to find and tell the stories of children and their families who face constant duress, which often go unrecognized: “Many of the families that I take care of … there’s no voice for them.”

Some story ideas worth exploring, according to the panel:

Some other reporting lines to explore also could include: