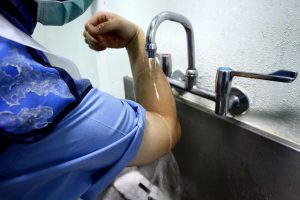 Many journalists have reported the local angle on these potentially avoidable complications, including Stephanie Innes for the Arizona Daily Star and Mark Hedin for the East Bay Times. Both Innes and Hedin explained that hospitals in their areas were penalized, such as with reduced Medicare payments, for a variety of avoidable conditions, including infections.

The new measure addressing antibiotic resistance is important because about 2 million Americans become infected with antibiotic-resistant bacteria each year. About 25 percent of those patients are infected during a hospital stay, and about 23,000 of them die from such infections annually, Rau reported. The federal Centers for Disease Control and Prevention (CDC) calls antibiotic resistance one of the world’s most pressing public health concerns.

In a four-part series published in November and December, Reuters reported that the number of antibiotics still able to treat certain infections is declining and government agencies are either unwilling or unable to require hospitals and nursing homes to report infection-related deaths or illnesses. In the series, journalists Yasmeen Abutaleb, Andrew Chung, Benjamin Lesser, Ryan McNeill, Deborah J. Nelson and David Rohde reported that the nation lacks a unified system for reporting and tracking outbreaks of deadly antibiotic-resistant infections, called superbugs.

“Even when recorded, tens of thousands of deaths from drug-resistant infections – as well as many more infections that sicken but don’t kill people – go uncounted because federal and state agencies are doing a poor job of tracking them,” they wrote.

Melody Peterson of the Los Angeles Times reported that thousands of Californians die each year from hospital-acquired infections, “But you’d never know that from their death certificates.”

One angle when reporting abouot about antibiotic resistance in your community is to focus on whether and how hospitals run antibiotic stewardship programs to manage their use of infection-fighting medications. As AHCJ medical studies core topic leader Tara Halle reported last spring, “antibiotic stewardship programs are an important part of reducing unnecessary use of antibiotics, which can range anywhere from 20 percent to 50 percent of all antibiotics prescribed in the hospital setting, according to the CDC.”

These hospital-based programs are designed to identify the most effective antibiotics for each infection and thus can reduce adverse events from their use, she wrote. For more on C. diff, see this Consumer Report story that identifies hospitals with high C. diff infection rates, including some of the nation’s best-known teaching institutions.