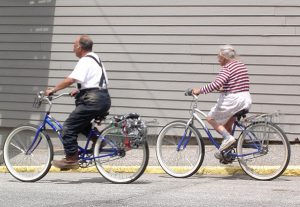 Making cities more age-friendly means getting those in charge on board with the idea. The Milken Institute is asking mayors throughout the United States to pledge to make their cities welcoming environments for older adults to age in place.

So far, some 150 mayors of cities of all sizes have promised to support neighborhoods that promote inclusivity and are sensitive to the physical, social and economic well-being of older adults.

The pledge is a tool designed to change hearts and minds among mayors about issues relating to successful aging, according to Liana Soll, who oversees the initiative as a senior associate at Milken’s Center for the Future of Aging. The most successful cities incorporate age-friendly features from housing and transit to social services and opportunities for continued employment.

“These are issues that impact people of all ages,” she said in a phone interview. “If a city is livable for older adults, it’s truly livable for everyone.”

Successful aging means different things to different people and looks different in every community. There are dozens of “best cities” lists published every year base on publicly available data such as health care, transportation, and employment. However, age-friendliness also encompasses issues that don’t show up in the statistics, such as this program in Palo Alto that helps people connect across generations, or foster relationships in the neighborhood, such as the village model. These approaches make a difference in the day-to-day quality of life for an older person.

It also is important to raise awareness about disparities in longevity and examine what can be done at the community level, Soll said. She points to Washington D.C., where the disparity in longevity can be several years from one metro stop to the next, according to Virginia Commonwealth University research that mapped out life expectancy in several cities. Participants in a session at the 2016 AHCJ conference that looked at how zip codes affect health and life expectancy also concluded that neighborhood affects lifespan.

Cities trying to improve their age-friendliness can take steps that may not seem like a big deal but make a huge difference to residents. New York City, for example, installed park benches across wide streets like Broadway and Park Avenue, which are difficult for an older person to cross quickly. Another initiative increases the amount of public seating on that city’s streets.

“It’s a place to stop and rest and maybe talk to some other people before moving on,” Soll said.  City-specific age-friendly programs are underway in places as diverse as San Diego, California, and Brookline, Massachusetts.

Some mayors who have yet to sign the pledge don’t want to commit without funding, city council buy-in, or before developing a concrete action plan, Soll said. Others have jumped on board with the spirit of the plan. Even those who have not signed now have heightened awareness of the challenges, she said. Moreover, those who have signed can be held more accountable for the well-being of older residents.

The National League of Cities and U.S. Conference of Mayors are supporting age-friendly initiatives and educational programs for their members. Lists of age-friendly cities are available from the World Health Organization and AARP. Check out the Milken Institute’s earlier report on best cities for successful aging. (An updated report is expected soon.)

How age-friendly is your city? Don’t miss the upcoming panel at #AHCJ17 in Orlando!