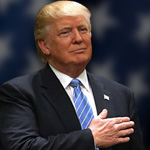 The Association of Health Care Journalists and 60 other journalism organizations have requested a meeting with President-elect Donald Trump and Vice President-elect Mike Pence to discuss access to government.

The coalition sent a letter today to Trump and Pence, asking for a meeting or conference call.

“Journalists need to stick together in fighting for government transparency, and this letter – signed by so many journalism groups – is a heartening example of that unity,” said Felice J. Freyer, chair of AHCJ’s Right to Know Committee.

Read the specific concerns in the letter.