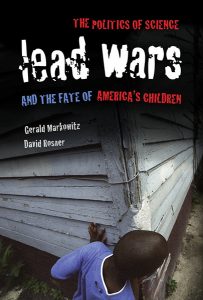 Join us for an AHCJ member webcast on Friday, Nov. 4, that may reframe your coverage of lead and its long-term impact on health. The one-hour event, “Long View on Lead: Covering the Crisis From Flint & Beyond,” will feature public health historians Gerald Markowitz and David Rosner, authors of “Lead Wars: The Politics of Science and the Fate of America’s Children.”

Markowitz and Rosner will offer their take on the nation’s long fight against lead poisoning and its devastating health impact, especially when it comes to children. In the shadow of the ongoing crisis in Flint, the experts will give their assessments on the state of environmental health and the history of lead contamination in our aging water infrastructure, in our soil, in paint and other means.

We will examine solutions that have been tried in the past and those being attempted now. We’ll also look at the many hurdles hindering communities from eradicating lead contamination once and for all. Reporters will leave with a better understanding of the environmental impacts affecting various communities, looking in particular at issues of children, race and equality. Participants not only will gain some historical perspective for their ongoing coverage but get some fresh story ideas and angles to cover.

I will moderate the webcast and take members’ questions. The webcast will begin at 2:30 p.m. EST.