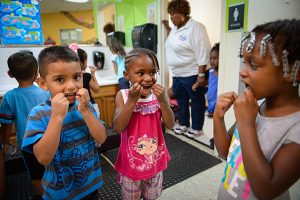 In recent months, Maggie Clark’s Two Million Kids series for the Sarasota Herald-Tribune has explored many facets of the state’s troubled Medicaid program: a dearth of preventive and specialty care in many communities, problems faced by providers and a decade-long legal battle to reform the system. In a recent installment, Clark focused upon the shortage of oral health care services for Florida’s poor children.

“Her mouth hurts. She doesn’t each much. The Bradenton 4-year-old who loves to blow bubbles has such severe dental disease that she had to get her front tooth pulled.”

In the story, Clark looked at how the state’s chronic shortage of Medicaid dental care has affected young Floridians. She delved into how the system got so bad and described how evolving reform efforts, driven by the settlement of a decade-long lawsuit, might improve it.

It was not easy for Keriana’s mother to find a dentist to treat her child, whose experience was far from unique. Nearly two thirds of the state’s two million Medicaid children went without dental care last year, Clark wrote. Dentist participation is very low in the state, reimbursement rates are seen as inadequate and bureaucratic hurdles are discouraging.

Then too, inaccurate provider lists offered to beneficiaries by their Medicaid dental plans further complicated an already difficult search for care, the newspaper found.

“For Medicaid-enrolled kids, dental care is an entitlement in federal law,” Scott Tomar, chairman of the Department of Community Dentistry and Behavioral Science at the University of Florida College of Dentistry, told Clark. “The current system is neither adequately funded or user friendly. It seems like it was designed to create as many barriers to utilization for parents, kids and dentists, as possible.”

Steps are being taken to address some of the program’s problems, Clark reported.

The legislature has called for a study that could trigger a shift in the way Medicaid dental plans operate in the state. In addition, a federal judge in June approved a settlement in a long-running lawsuit between Florida’s Medicaid program and a group of parents, pediatricians and pediatric dentists.

“The state has pledged to work with health providers to improve the program,” Clark wrote. But for now, the suffering continues and emergency room visits for dental needs go on climbing in the state.

Roughly $93 million in charges for those visits were billed to Medicaid, Clark noted. Yet as across the country, the patients seldom received the dental care they needed in the hospital emergency rooms. The ballooning ER rates are just one more symptom of the real problem, Tomar observed in the story.

“If people had real access to dental care, they wouldn’t be at the emergency department,” he said.

In Clark’s piece, parents, dental leaders, lawmakers provided a range of insights into the complexities of accessing and delivering dental care in the state.

Clark bolstered the impact of her coverage through her use of data gleaned from an array of federal, state and nonprofit sources. A Herald-Tribune survey of dentists listed as Medicaid providers in the Sarasota area concluded that few dentists were actually available to serve local children.

In a new AHCJ tip sheet, Clark offers thoughts on the importance of dental care for children. She also provides plenty of good ideas, compelling angles and resources for reporters.

By many measures, the problems with Florida’s Medicaid dental program are particularly acute, as Clark has reported. But many of the same issues plague Medicaid programs across the country. How is your state program doing?