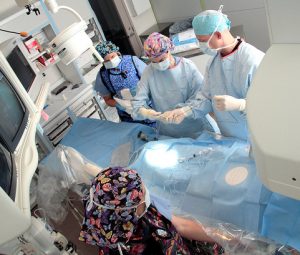 The Centers for Medicare & Medicaid Services just announced a five-year test, to begin next summer, of a new way to pay for the care of patients who have had a heart attack or need coronary artery bypass graft surgery.

As with any new payment model, unintended consequences are possible. The experimental bundled-payment program, which was announced July 25 and will begin July 1, 2017, potential could lead some physicians to sell their practices to hospitals, be financially risky and potentially harmful to the hospitals forced to participate, and could lead to an increase in heart attacks, warned Francois de Brantes, executive director of the consulting firm Health Care Incentives Improvement Institute and an expert on bundled payment models.

Under the experimental program, called Advancing Care Coordination through Episode Payment Models (pdf), the CMS Center for Medicare and Medicaid Innovation will require acute-care hospitals in 98 areas to participate in what are called retrospective episode payment models for Medicare beneficiaries who now are receive care under a fee-for-service model. Medicare under the test will use a bundled payment method for those patients who need treatment for acute myocardial infarction (AMI) and a coronary artery bypass graft.

CMS in the same announcement also introduced a new program aimed at increasing use of cardiac rehabilitation services by using incentive payments to hospitals whose patients had a heart attack or bypass surgery. In addition, it expanded its Comprehensive Care for Joint Replacement Model of payment to include surgery to repair hip and femur fractures. Last year, we wrote about the joint-replacement program and concerns about potential unintended consequences.

In 2014, more than 200,000 Medicare patients were hospitalized following a heart attack, costing CMS over $6 billion, reported Elizabeth Whitman in Modern Healthcare. She noted that costs then varied by as much as 50 percent.

By paying a set amount for each patient’s episode of care, CMS aim to give hospitals a financial incentive to keep costs down since it will pay one set price (called bundled payment), for all related care within 90 days of hospital discharge, Whitman wrote.

The goal is to enable Medicare to shift from fee-for-service to alternative payment methods for 50 percent of all spending by 2018, as Dan Diamond reported for Politico: “Liberal experts say they (CMS) can’t get there with accountable care organizations and voluntary models alone, and that mandatory bundled payment programs are proven successes,” Diamond wrote adding that the experimental program also is significant because it gives physicians a new way to qualify for financial rewards under the Medicare Access and CHIP Reauthorization Act (MACRA).

But Francois de Brantes, executive director of the Health Care Incentives Improvement Institute, outlined for me three potential weaknesses in the payment model. First, by paying hospitals to lead these programs, physicians can serve only as participating providers rather than as organizers of care, he said in an email. As a result, physicians would have less flexibility to schedule these procedures at a less expensive facility outside the hospital. He also contends that the program fails to adjust adequately for patient illness severity.

In addition to these concerns, de Brantes also sees three potential pitfalls to monitor as the five-year test proceeds. First, the program, and the proposed rule for MACRA, could push independent physicians to sell their practices to hospitals. When hospitals employ physicians, costs tend to rise, he noted.

Second, de Brantes sees a lack of appropriate mechanisms to adjust for the severity of illness, which increases the potential financial harm a hospital could face in caring for patients with highly complex illness levels. Evidence suggests that these more complex patients thus tend to be referred to academic centers, which can be more expensive.

Lastly, de Brantes believes the proposed reforms actually could result in an increase in heart attacks. Given that heart attacks are avoidable complications for patients with cardiovascular and associated conditions, health care providers should focus on preventing them. “Why would you want to create a payment formula that encourages them?” he asks.