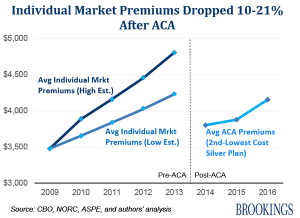 Here’s an argument that premiums under the Affordable Care Act actually have dropped. Loren Adler and Paul Ginsberg of the Brookings Institution argue this in a recent Health Affairs post, summing up their findings. But not everyone agrees.

Conservatives have attacked both the methodology and the conclusions in “Obamacare Premiums Are Lower Than You Think.” Given that it contradicts some earlier studies, even some ACA supporters say they’d like to see more research on some of the points made by Adler and Ginsberg. More on the critics below, but first let’s look at pair’s findings. Adler and Ginsberg write:

“Since the Affordable Care Act’s (ACA) health insurance marketplaces first took effect in 2014, news story after story has focused on premium increases for certain plans, in certain cities, or for certain individuals. Based on preliminary reports, premiums now appear set to rise by a substantial amount in 2017.

What these individual data points miss, however, is that average premiums in the individual market actually dropped significantly upon implementation of the ACA, according to our new analysis, even while consumers got better coverage. In other words, people are getting more for less under the ACA.” [Emphasis added.]

They argue that premiums would have risen faster without the ACA – and that the benefits are much more robust than in the old individual market. And that doesn’t even take into account subsidies for premiums and, for many, cost sharing.

These expanded benefits should be familiar: a package of essential benefits that is much more protective than many pre-ACA plans, narrower rating bands (older people can be charged only three times as much as young ones), limits on out-of-pocket costs, no more lifetime caps, and, of course, people who have been sick can get covered. Insurance is better, and it protects people when they need it.

Adler and Ginsberg argue that other features of the law – including the simple fact that many more people are now being covered (thus expanding the market) – plus the addition of somewhat greater transparency, are bringing down prices. Indeed, they point out that the Congressional Budget Office back in 2009 had projected insurance cost to have been even higher by now. That’s partly because of changes in health care spending caused by the ACA, but also other “curve bending” moves in the health system and some broader economic trends having to do with the recession and pace of recovery. Healthy people may have seen rates increase, particularly as they bought these bigger benefit rates, but many sick people – those able to get coverage – had often been paying a great deal.

Early signs are that premiums are going up for 2017 – for many reasons, including that reinsurance payments stop under the law. In addition, Congress has blocked the risk corridor payments that health plans had counted on. On top of that, many health plans, expecting a healthier risk pool, priced premiums too low.

Adler and Ginsberg acknowledge the likelihood of rate hikes for next year. But by looking at lot of market data and history, they argue that the cost of insurance still will be way lower than it would have been without the Affordable Care Act. “ACA premiums would have to grow by more than 44 percent in 2017 to approach where individual market premiums would have likely been in the absence of the ACA, even under conservative assumptions,” they write.

Of course, when people start signing up for health plans in November (and the markets open just a few days before Election Day), it may be hard to make a case to consumers/voters: “Hey it would have been way worse without the law.” Particularly after they’ve been inundated by years of anti-ACA messaging blaming all the many flaws of the health care system on the Affordable Care Act.

Adler and Ginsberg’s piece immediately came in for a fair amount of criticism. (If you go to the Health Affairs blog post linked above scroll down, you’ll find critical readers’ comments as well as links to opposing views and studies with different findings.) Part of the criticism centered on their methodology and numbers. Certain assumptions made in the piece also were questioned. Writing in Forbes (registration required), researcher Brian Blasé of the conservative Mercatus Center at George Mason attacks the methodology and the findings and argues that insurance now costs way more. Conservative health wonk/activist Chris Jacobs also took issue with some of the assertions about consumers being better off.

These and other critics of the law also point out that even if the Brookings numbers are right – that this insurance is cheaper than such a policy would have cost pre-2014 – it misses the point that a lot of people don’t want this insurance. They were happy with the skinnier benefit package, fewer mandates – and lower cost.