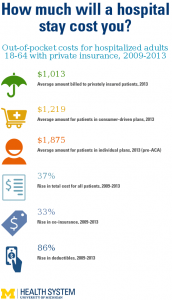 The share of costs that consumers are paying rose by 13 percent from 2014 to 2015 according to a new report from TransUnion Healthcare. What’s more, the report shows that as these costs rose, patients had fewer resources to pay those increased expenses because their amount of revolving credit had declined.

Out-of-pocket costs are a combination of what patients pay in deductibles, coinsurance and copayments for covered services. Coinsurance is a percentage of the total bill and a copayment is usually a fixed amount due at the time of service. Consumers pay for these costs until they reach the out-of-pocket maximum when insurance starts paying.

Last year, the average deductible for consumers totaled $1,278 and the average out-of-pocket maximum was $3,470, according to the TransUnion Healthcare report. Consumers incurred the highest out-of-pocket costs for dermatology (averaging $2,451), orthopedics ($2,405) and general surgery ($2,264).

A second study by researchers at the University of Michigan calculated that the average out-of-pocket cost of an inpatient hospital stay for a consumer with private health insurance was more than $1,000. Kate Ashford reported in Forbes that the researchers found that those out-of-pocket costs rose 37 percent from $738 in 2009 to $1,013 in 2013. “Most of this increase was due to a jump in the amount applied to deductibles, which rose 86 percent from 2009 to 2013, and secondly by increases in coinsurance, which went up by 33 percent in the same period,” Ashford wrote.

Ashford quoted Emily Adrion, Ph.D., who is a research fellow at the University of Michigan’s Center for Healthcare Outcomes and Policy and lead author of the study, who said the researchers were surprised that out-of-pocket costs rose by 6.5 percent annually, much faster than other insurance costs. The most recent Kaiser Family Foundation’s 2015 Employer Health Benefits Survey showed that health insurance premiums rose by 4 percent annually.

Adrion and colleagues reported that growth in health insurance premiums rose by 5.1 percent, and that overall spending on health care rose by 2.9 percent.

But are out-of-pocket costs truly out of control? To answer that question, read what Sarah Kliff reported at Vox last year on research that showed that when consumers have high deductible plans, many use less care. “This raises a scary possibility: Perhaps higher deductibles don’t lead to smarter shoppers but rather, in the long run, sicker patients,” she wrote.