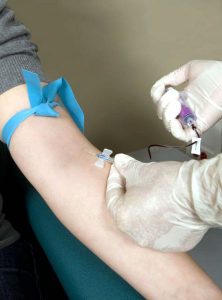 “The FDA said it was establishing a public docket for comment about its current recommendations and that interested people should submit comments, backed by scientific evidence, supporting alternative potential policies to reduce the risk of HIV transmission,” Reuters’ Toni Clarke reported on July 26. The agency is taking comments until Nov. 25.

The call for comments follows appeals for the agency to reconsider its policy on gay donors in the wake of the June 12 shooting, which killed 49 people at an Orlando nightclub that catered to the LGBTQ community

FDA officials had softened their recommendation in December, from an outright ban for all gay men to recommending a 12-month waiting period for those meeting certain criteria. Certain types of potential donors, including sex workers, are still banned from donating.

But following the June 12 shooting, gay men in particular were looking for a way to help and frustrated that they were not allowed to donate blood. One shooting victim, ironically was a blood bank worker.

“The FDA is now signaling it may go further,” Clarke wrote.

“Specifically, the FDA invites comments on the feasibility of moving from the existing time-based deferrals related to risk behaviors to alternate deferral options, such as the use of individual risk assessment. The agency also invites comments regarding the design of potential studies to evaluate the feasibility and effectiveness of such alternative deferral options.”

Maggie Fox at NBC News, Jacqueline Howard at CNN and Alexandra Sifferlin at Time also have reported on the FDA’s potential reconsideration of the policy.

Separately, the FDA on July 27 directed Miami-Dade and Broward counties in south Florida to halt blood collection as officials investigated whether some Zika virus cases in Miami may have been contracted locally and not overseas. Local officials have since confirmed that four cases resulted from local mosquitoes.