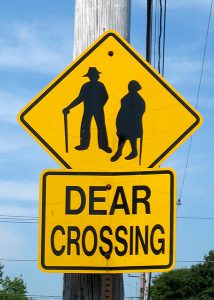 Older adults are commonly subjected to a variety of negative stereotypes – bumbling, helpless, cranky, unapproachable, child-like, to name a few. Ageism has real mental and physical health consequences, including a decreased will to live, less desire to live a healthy lifestyle, an impaired recovery from illness, increased stress and a shortened life span.

“Ageism remains one of the most institutionalized forms of prejudice today,” according to Todd Nelson, Ph.D., professor of psychology at California State University, Stanislaus. In the June issue of American Psychologist, Nelson argues that most people don’t view stereotypes about seniors the same way they may view negative portrayals of racism or sexism. And this article in the Huffington Post shows at how some compliments can be considered ageist.

Think about it – we talk about being “over the hill” or having “senior moments.” A glance at any birthday card display sends the message that older equals bad. According to Nelson, some $114 billion was spent in 2015 on efforts to hide the physical signs of aging.

“Our entire society tells older people, you are useless, unwanted, and a burden. It tells younger people that getting old is bad, and being old is worse,” said Nelson, whose research showed that negative self-perceptions due to ageism affect older adults on many levels.

They may struggle more with even basic activities of daily living. Those who attributed disabilities such as arthritis to “old age” had significantly higher levels of heart disease and hearing loss compared with those who did not cite age as a factor. Being older and female can be a double whammy.

Even health care providers fall into the ageism trap, Nelson points out. Providers may be reluctant to discuss using technology, fearing that an older patient may shy away from it. Or they may routinely attribute physical or mental symptoms like depression or aches and pains as a natural part of the aging process without looking for other causes.

Many of these negative effects dissipate when the older adult doesn’t perceive themselves as fitting that stereotype. Rejecting stereotypes decreases the chances of developing psychological problems such as PTSD or anxiety, and also protects against physical decline. What will help even more, Nelson said, is for psychologists to educate the general public on the myths of aging and talk about the positive aspects of growing older. Also, consider the language used when describing older people.

Ensuring social and physical support systems are in place and that older people have a purpose. Nelson cites the foster grandparents program as one option for continued community involvement.

Health professionals, most importantly, should check their own biases at the door when dealing with older adults. When older adults are viewed positively, it benefits their physical and mental health; it will also promote a society that is more considerate of their needs, values their contributions and doesn’t dismiss them as irrelevant.

Many of us – including journalists – may be guilty of ageism without realizing it.