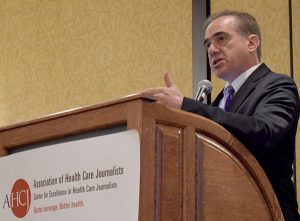 David Shulkin, undersecretary for Health at the Department of Veterans Affairs, spoke to Health Journalism 2016 attendees.

In a conversation with Renee Montagne on Morning Edition last week, David Shulkin, undersecretary for Health at the Department of Veterans Affairs, gave an update on the VA two years after a cover-up about long wait times made the news.

Shulkin was a Spotlight Speaker who gave a news briefing at Health Journalism 2016 in Cleveland, where he told journalists that same-day appointments were now available for veterans at some centers and would be available at all of them by the end of this year.

But his interview with Montagne revealed more problems. As he talked about the Veterans Choice program that allows veterans to see private doctors, he had to answer to NPR’s investigation finding “that, by and large, it has not been working as planned.” Doctors are waiting for payments, the provider network is too small and some veterans are waiting even longer than they were before for serious conditions, Montagne said.

Shulkin offered some of the same talking points he gave at the conference: “Well, I can tell you there is no issue the VA is more focused on than fixing this. That’s why we’ve put in legislative proposals to fix it. And we’re not going to stop until we get this right.” Shulkin took the opportunity to point out that the VA is “the only system in the country that delivers care to every corner of the country. And so it’s a very, very big system.”

Those who attended the AHCJ conference session on Saturday afternoon, “Taking Care of the Changing Veteran Population,” also heard about the challenges of caring for veterans, but an undercurrent to the conversation suggested things were being held back. What wasn’t being said may indicate opportunities for digging into the VA story even more and a variety of ways to localize this national story.