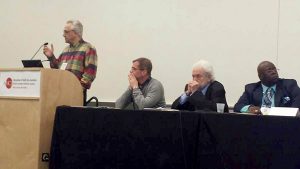 Yet there we were talking about it: trauma. post-traumatic stress disorder, depression.

“It’s unusual for somebody to have PTSD and only PTSD,” panelist Joseph Calabrese, M.D., of Case Western Reserve School of Medicine and University Hospitals Case Western Medical Center, said last month during the session, “Taking Care of the Changing Veteran Population.” The panel took a broad look at the health challenges facing those who served in the wars in Iraq and Afghanistan.

Calabrese, a psychologist who is the coordinating principal investigator for the Ohio Army National Guard Mental Health Initiative, noted that top disorders affecting veterans include alcoholism, depression and general anxiety, which, along with PTSD, can increase the risk of mood disorders or suicidality.

While many veterans grapple with a range of physical issues, from the effects of environmental exposure to lost limbs, the discussion gravitated toward the ongoing challenges of mental health.

“We’re dealing with a lot of service members that are coming back with catastrophic disabling injuries,” said panelist Will Brown, a service officer with the American Legion in Cleveland.

The panel, moderated by Tony Leys of the Des Moines Register, also covered other issues facing veterans, such as the need for additional training for vulnerable service members, the effects of back-to-back deployments and a rise in debilitating injuries from a war where modern gear has saved soldiers’ lives but could not prevent loss of limbs.

Time and time again, panelists came back to one looming public health issue: the need to understand, recognize and treat a veteran’s post-deployment psychological issues without ostracizing the sufferer. Particularly among veterans, the stigma can be overwhelming, and discourage many from seeking help for fear of endangering their military-tough image, panelists said.

“We know if you ignore it, it doesn’t get better,” Calabrese said, adding that the media can help. He and the other panelists urged reporters to find and write the tough stories about suicide, gun violence, and other issues, as well as the impact of counseling and other treatment. That can help combat stigma, bias and lack of funding to explore and tackle the issue.

“You guys can make a difference,” Calabrese said.

AHCJ members: See the speakers’ presentations from this session.