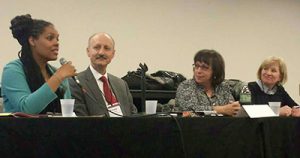 A single tear is okay, but don’t cry.

Kathleen Hackett, a sexual assault nurse examiner, recently told AHCJ members that breaking down while listening to stories from victims can retraumatize them or even force them to emotionally shut down so as not to cause any one else pain.

“We have to be careful in our response,” said Hackett, who has more than 30 years of nursing experience and has worked with children in the hospital after their ordeal, adding that she never cries in front of her patients.

This was among several pieces of advice given during a panel on mental trauma at AHCJ’s annual conference last month in Cleveland. The session, led by independent journalist Katti Gray, broached a subject that, despite its importance, can be challenging to cover.

Trauma manifests itself in so many ways. Too frequently, society grapples with the symptoms of trauma that often lead people to be labeled “bad” instead of exploring, understanding and ultimately addressing the root causes of such behavior.

“Trauma is very common … throughout the lifespan,” said Dr. Ewald Horwath, who leads Case Western University’s Department of Psychiatry. “We’ve come to an understanding that especially recurrent traumatic experiences have profound effects on mental development and emotional development and on mental illness. And the path from trauma to mental illness is often quite complex, and the consequences can be devastating.”

For children who experience traumatic events, the impact can be everlasting.

Trauma can damage cells, increase the hormone cortisol, and prevent children from forming attachments, Buffington said. Add the emotional response, and “a cascade” of problems can ensue from substance abuse and depression to sleeplessness.

“It can cause developmental lags because all of the resources that children are supposed to put into learning and intelligence and coordination and thinking and being healthy are having to be deferred to survival,” Buffington said.

Clearly, one way to prevent mental trauma would be to stop it from happening in the first place – a heavy task that panelists said is not realistically always possible.

Still, Dr. Glenda Wrenn, director of the Division of Behavioral Health at Morehouse School of Medicine in Atlanta, said increasing attention is being paid to how to treat mental trauma to help patients deal with the traumatic experience itself, not just its effects.

Wrenn, a clinical psychiatrist, noted that while traumatic events can trigger negative adaptive behaviors, it can also spark resiliency. How often people experience trauma, as well as other factors, can impact one’s ability to bounce back, but it is also possible to build resiliency.

“It can be developed and strengthened and enhanced through developing core competencies,” Wrenn told the audience.

Buffington, along with other panelists, also concurred. As people acknowledge their trauma and see possible survival strategies, they can also come to see their strengths to move forward. “Believe it or not there is hope,” she said.