When you fly into Cleveland Hopkins Airport for Health Journalism 2016, you can get to your downtown hotel by taking a $40-$45 taxi ride, or you can book a seat on a shuttle for $35 one way and $60 round trip. Both will use Interstate 71, so you’ll see zip-nada-nothing of Cleveland’s interesting landscape until you are almost there.

Or you could follow the ground transport signs down to the light rail station and take the Greater Cleveland Regional Transit Authority’s Red Line train (which locals call “the rapid”) into Cleveland. It runs every 15 minutes (except between midnight and 4 a.m., when it runs less frequently) and provides fast, cheap and scenic service between the airport and Terminal Tower in downtown Cleveland.

The trip will cost you $2.50 if you are under 65 and $1 if you are over. (If you are older than 65 and don’t look it – and I know this from experience – have proof of your age to show the security police who may or may not be checking tickets.)

Or, you could purchase an all-day pass (which is good until 3 a.m.) and use it to explore. Here are the rates:

Catch #1: You must pay with exact change, so have lots of $1 and quarters with you.

Catch #2: The ticket vending machines at the station’s entrance: They look complicated, but these are easy-peasy: figure out what kind of ticket you want (one way, all-day, senior, student, etc.); hit that button; feed in your fare; collect your ticket from the slot at the bottom.

The 20-25 minute trip (longer if it’s rainy) takes you past one of the nation’s biggest auto plants; a former NASA hanger that’s been repurposed as our International Exposition Center; through several architecturally interesting neighborhoods; past the amazing West Side Market; over the Flats (which, on Friday and Saturday nights, brings New Orleans during Mardi Gras – minus the plastic beads – to mind); and deposits you and your rolling bag in the lower level of the circa 1930s, beautifully restored Terminal Tower. It’s packed with shops, has a pretty good food court overlooking the Cuyahoga River (for which the county was named) and is home to Tower City Cinemas (where many of the films featured in this year’s Cleveland International Film Festival will be shown). 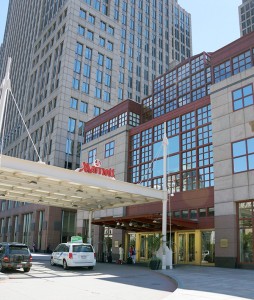 Follow your fellow travelers up the escalators and through the barrel-vaulted lobby and you’re out on Euclid Avenue. If you’re staying at the Renaissance Hotel, hang a sharp left; the entrance to the hotel is easy to spot.

If you’re booked into the Cleveland Marriott Downtown at Key Center, look across Public Square, and you’ll see a gloriously Gothic red sandstone building and a looming glass and steel tower. Head in that direction and four or five minutes later you’ll be at the Public Square entrance to the hotel.

If you’re booked into another hotel, hail a cab: most of the downtown hotels are within 10 to 15 blocks of Terminal Tower, so the ride should cost no more than $5-$6, even during rush hour.

If you have time to explore Cleveland, head for Euclid Avenue and hop on the free trolley or one of the caterpillar-looking HealthLine buses and head up Euclid Avenue to University Circle, CWRU, Little Italy and the interesting shops and museum at the intersection of Euclid Avenue and Mayfield Road.

Welcome to my city!

The Road to Cleveland