Research from the Health Care Pricing Project shows that when hospitals have a monopoly in a market, prices are 15.3 percent higher than prices in hospitals where there are four or more hospitals, even after controlling for costs in those markets.

No doubt there’ll be lots of talk about hospital consolidations at AHCJ’s upcoming Health Journalism 16 conference in Cleveland. At one session in particular, Zack Cooper, Ph.D., an assistant professor of health policy and of economics at Yale University, will talk about the research he and his colleagues published last year on how hospital consolidations affect what hospitals charge consumers and insurers.

The session, “Merger mania of health providers and the rise of dominant and potential monopolies,” is scheduled for 4:40 p.m. to 6 pm. on Saturday, April 9.

During the panel, we’ll also hear from Kevin Sears, executive director of market and network services for the Cleveland Clinic, and Karim A. Botros, chief strategy officer for MetroHealth, a public hospital in Cleveland. 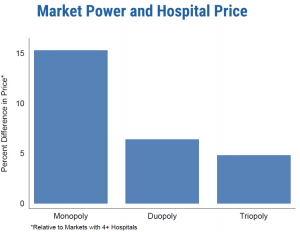 In their research, Cooper and colleagues found that hospital prices are 15 percent higher in monopoly markets than they are in markets with four or more hospitals. But since those increases tend to come well after the ink has dried on the merger agreements, the largely go unnoticed and therefore unreported.

When employers pay more for health benefits for employees, their families and retirees, they may forgo wage increases, he added. If employers can’t hire and wages are unchanged or decline, then the effect of a large hospital merger on a local economy may be a significant story to explore.

For journalists seeking more information on the work of Cooper and colleagues, check out this recent tip sheet. Also, go the Health Care Pricing Project site, where you’ll see the research based on data from the Health Care Cost Institute. Three of the nation’s largest health insurers – Aetna, Humana, and UnitedHealthcare – contributed data from 92 billion health insurance claims by 88 million Americans. That information on spending and health care usage comes from 27.6 percent of all Americans with employer-sponsored coverage. Most health care policy research relies on Medicare data, which represents only 16 percent of the population.

For health care journalists, this session will provide an extraordinary opportunity to understand the effects of hospital mergers on cities and towns, learn about hospital price variation, and hear how hospital administrators set prices in the Cleveland market.

Not yet registered for Health Journalism 2016? The advance registration deadline for the April 7-10 event has passed, but you can still join us with on-site registration. Check here for details.

The Road to Cleveland