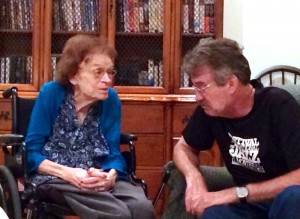 Photo by Liz SeegertAging in place is the choice for many older adults, but it’s also about aging in a community.

I spent part of the holidays in southern Virginia, visiting with my husband’s family. The whole clan was there to celebrate my mother-in-law’s 95th birthday. Mom had been living with my sister-in-law — her daughter — for about seven years, but recently moved in to a nearby assisted living facility when my sister-in-law returned to work. The change in her cognitive status was noticeable.

Mom was engaged and animated, joined our conversations and readily followed the verbal action. She had a lot to talk about, and did so fairly well (although it sometimes took a bit for her to get the sentences out due to a mini-stroke several years’ back). She was excited about the friends she had made at the facility, liked the staff, and enjoyed the meals in the dining hall, which offered plenty of healthy options.

Although she needed help cutting meat, she could otherwise eat by herself — albeit slowly. She proudly showed off the gingerbread house she’d made earlier that week in the arts and crafts class. Despite being wheelchair-bound from frailty and effects of several chronic conditions, she was as much a part of the family celebration as her grandchildren and great-granddaughter. And when the cake came? No problem blowing out the “9” and “5” candles!

Later, she told me longevity ran in her family; and to live well in old age, “just go with the flow and be kind to other people.” While she never expected to live so long, she said she was happy to be living in a nice facility, because it took some of the burden off her daughter. It also appears that it gave her back some quality of life.

We report a lot on aging in place as the choice for many older adults. My mother-in-law’s situation put a different spin on it — aging in place is also about aging in a community. She still sees her daughter almost daily, but she’s also benefitting from increased social interaction, cognitive and physical activity, a regular routine and the chance to feel like a valued part of her little community while still having her own “place.” This report from WNDU looks at the pros and cons of aging at home vs. assisted living.

Her cozy studio “apartment” has all of the amenities she needs. On premises is a game/all-purpose room, library and spacious dining room. The facility was well staffed, even at night. It was designed to look more like a home or a hotel than an institution. And, help was never further away than the push of a button on the pendant hanging around her neck.

Despite multiple health issues, Mom was able to move into an assisted living facility instead of a nursing home because her cognition is still relatively good and she doesn’t require more care than this type of facility provides. Of course, if she gets much frailer or becomes more impaired, things could change. But for now, she’s happy and seemingly well cared for.

Depending on location, assisted living facilities offer varying levels of medical and non-medical health care. Anyone considering this option for themselves or a family member must do their due diligence. As Frontline, in partnership with ProPublica, recently reported, not all assisted living is this well run.

Community comes at a price

A good facility is the type of environment where many elders thrive. It’s a great transitional step between living independently at home and living in a nursing home. It’s a good alternative for families who can’t have a relative live with them for various reasons. It provides just enough independence coupled with communal living — while offering crucial care services to those who might otherwise be forced into more traditional nursing homes. And, it helps alleviate the very real problem of social isolation that many seniors living in their own homes face.

However, it doesn’t come cheap. Depending on the location and services, assisted living can easily run $3,000 to $5,000 a month. With few exceptions, assisted living is not covered by Medicare or Medicaid. Costs are out of reach for many older adults. And therein lies the challenge: how can we provide that sense of community for seniors who truly can’t live alone in pleasant surroundings, with the right level of ADL support, without driving the person, or the family, into poverty?

As the Atlantic article discusses, models like the “village” concept and other community-based alternatives for low-income seniors may be the solution. It’s another way to think about assisted living. The need for a different type of housing for older adults is only increasing. Fortunately, so is the realization that regardless of environment, being part of the community is an essential component.

Reporters might want to look into what housing models are successful in their communities. Is there a Village model? Another type of supportive, community-based set up? Also ask: