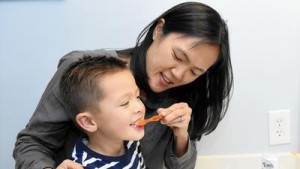 A routine dental checkup for a Baltimore 4-year-old turned into a health care odyssey for his mother.

It all began when a dentist told Heather Powell that her son Eli had several cavities, and would need to go under general anesthesia to have eight crowns placed on his back teeth.

“I could not wrap my head around the fact that my kid would have to go through a procedure of this magnitude,” Powell told reporter Andrea McDaniels for a recent story in the Baltimore Sun.

McDaniels, who covers health and medicine for the paper, describes what happened next:

“Desperate for an alternative, Powell began searching the Internet for other options. She discovered a handful of dentists around the country who use a mixture called silver diamine fluoride to freeze cavities, preventing the infection from spreading. The clear concoction is simply painted on — a process that takes mere seconds per tooth. The silver makes the tooth hard. Powell was sold.”

But the mother confronted challenges when she decided to seek the treatment for her son. While dentists around the world have used silver diamine fluoride for years, the procedure is not as well known in the United States. The mixture only recently won Food and Drug Administration approval for limited use in this country – as a device used to treat tooth sensitivity in adults, McDaniels reported.

When used to treat tooth decay, the mixture turns the lesions black. But cosmetic considerations aside, silver diamine fluoride has strong supporters who see it as economical and less invasive option to drilling and filling teeth. Clinical trials are underway that could provide more evidence of its effectiveness.

“I think it’s an exciting new tool in our tool kit,” Amr Moursi, chairman of the Department of Pediatric Dentistry at New York University College of Dentistry, told McDaniels.

“It’s certainly not a silver bullet for every cavity or every child who has tooth decay, but it has the potential to significantly change the way we approach tooth decay, especially in young children and in underserved populations,” Moursi said.

Ultimately, Powell succeeded in persuading her dentist to order some silver diamine fluoride and use it off-label to treat Eli’s cavities. The boy seems to be doing well, and his relieved mother wants more parents and dentists to know about the treatment.

“We avoided tons of trauma, pain and discomfort,” Powell said in McDaniels’ story.

Are oral health care providers in your community talking about silver diamine fluoride?