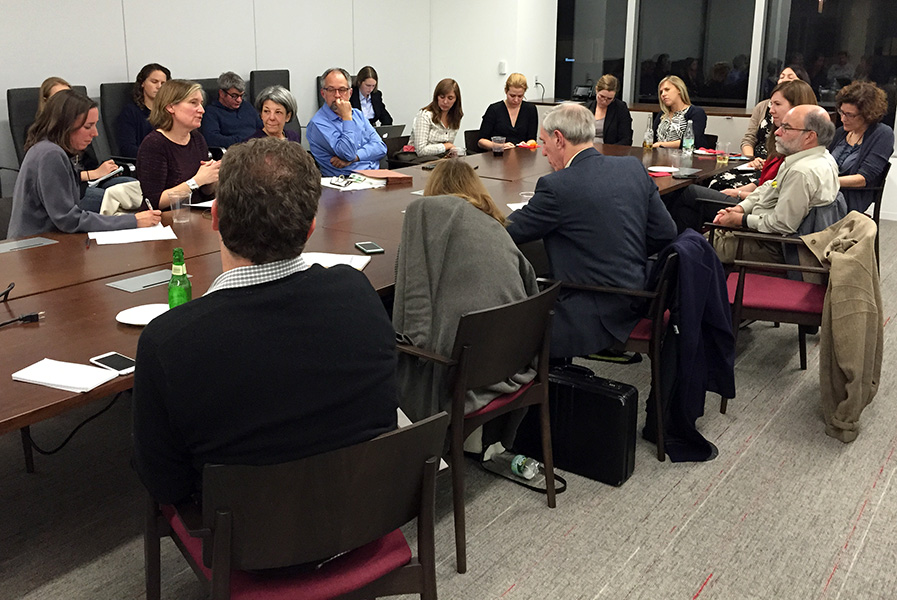 Here are some of their insights and story ideas that can help reporters keep this story fresh.

Salo made the argument that politicians keep saying Medicaid is “broken,” but he says it’s the health care system that’s broken – and a lot of its problems get “dumped” on Medicaid. He made the case that Medicaid is actually making great strides in moving away from uncoordinated fee for service and reshaping the health care system to have better care coordination and value. He was quite frank that progress is uneven – some states are doing better than others.

He also reminded us that the big money in Medicaid is spent on the disabled, the elderly, and in long-term and home- and community-based care.  That doesn’t come across in a lot of the debate about Medicaid cost.

Nine million “dual eligibles” – who are covered by both Medicaid and Medicare – account for about 40 percent of Medicaid spending, and the coordination between the two programs remains poor, full of misaligned incentives. “Lots of things need to change,” he said.  The oldest, frailest, and sickest get “whipsawed” between the two programs. (Lots of states are testing ways of improving the coordination, and this is a story you can pursue.)

Mann said that Medicaid expansion is often portrayed as a partisan fight – but it’s also a fight within the GOP.  There are several states where the governor wants to expand Medicaid under the ACA, but the legislature disagrees (and a few that it’s vice versa.) That being said, she expects that more states will take up the expansion over the next year or two – but it partly depends on in-state electoral politics, who is likely to face a primary challenge from a more conservative opponent etc. (This is a dynamic those of you in non-expansion states might be tracking.)

In addition, lots of rural hospitals are having financial challenges (not all of which are ACA-related) and those in non-expansion states have the extra burden because lot of their patients remain uninsured when they would be Medicaid eligible under expansion. Kansas is a case in point; see this piece from The Kansas City Star. That may well play out in state legislatures, adding to the pro-expansion arguments.

Cindy Mann agreed with Salo on delivery system reform – there’s a lot of activity, and a lot of states understood during the Great Recession that it’s preferable to cut inefficiency than cutting beneficiaries or providers. But those changes take time – no switch can be flipped when the economy tanks. But there’s “an extraordinary amount of activity in delivery system reform” going on right now.

Quite a few states are also exploring how to better coordinate behavioral/mental health and primary care (another story to pursue.) And she also pointed out a lot of states have been very successful in shifting from nursing home care to home- and community-based care, which is what most people prefer. That’s a delivery system reform that’s been driven by Medicaid – and it’s actually what people want.”

She also reminded journalists that governors and critics of Medicaid also refer to it as the largest item in state budgets, surpassing education. That’s not quite true – not if you consider that more than half the Medicaid money in non-expansion states and a far higher share in the expansion states is coming from the federal government.  It’s not state funds; it’s federal funds.

Alker stressed the extraordinary progress in covering kids – and here’s a report from the Georgetown Center for Children and Families giving the break down by states.

But she pointed out that the coverage rates remain higher for young kids than for adolescents. “The younger they are, the more likely they are to be signed up for coverage.” But there are a lot of health issues that come up for teens that need to be addressed.

She also urged reporters to look into claims that certain changes to Medicaid are saving money. If it’s because of improvements to how care is being provided, terrific. If it’s because the state (or managed care plan or ACO or whatever…) is stinting on care – that’s not so hot.

“Does it save money? Why? Is it for the right reasons – managing care better? Or the wrong reason – preventing folks from accessing services.”