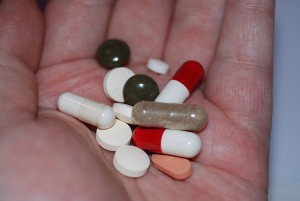 Medications — including many over-the-counter drugs —  are among the greatest contributors to accelerated cognitive decline in older adults, according to experts at the recent Gerontological Society of America conference in Orlando, Fla. Yet, they are probably the most frequent reversible contributor to adverse cognitive events.

Several authors of a 2015 report from the Institute of Medicine (IOM) on cognitive decline (previously reported on here) presented their findings and discussed implications for individuals, providers, public health officials and policy makers.

“Older adults are prescribed an average of 14 drugs per year,” said Sharon Inouye, M.D. and director of Aging Brain Center and Professor of Medicine at Harvard Medical School. “If you think about that, there’s tremendous potential for drug-drug and drug-disease interactions.”

Up to half of those drugs are anticholinergic agents. These medications block neurotransmitters in the central nervous system and are associated with cognitive impairment.

“One of the recommendations of the report is to avoid potent anticholinergics and over-the-counter meds such as antihistamines that contain diphenhydramine, like Benadryl,” Inouye said. She pointed out that health providers should play a critical role in monitoring older adults to avoid inappropriate medication use.

Maintaining mental sharpness is an important goal for most of us as we age. While some changes in brain function are a normal part of aging, the IOM report, Cognitive Aging: Progress in Understanding and Opportunities for Action, identified factors that hasten this process.

“We must overcome the stigma and misconceptions that may prevent older adults from seeing resources that can promote cognitive health and overall quality of life,” the report concluded.

Factors as diverse as occupational exposure to certain chemicals, alcohol use, sports-related brain injury, chronic infections and some psychiatric conditions all may affect cognition later in life, said IOM committee member Robert Wallace, M.D., an epidemiologist at the University of Iowa’s College of Public Health. He is studying how life experiences in the K-12 age group, including childhood trauma, can influence cognitive decline later.

Wallace stressed that cognitive aging is not the same as Alzheimer’s disease — but rather is part of “statistically normal aging.” Alzheimer’s affects roughly 10 percent to 14 percent of the population, but everyone experiences gradual age-related cognitive decline. It’s a process that begins at birth and continues throughout life. The extent and nature of the change occurs gradually and varies from person to person.

Symptoms of cognitive aging have widespread societal consequences, the authors said. Communities must be ready to address the challenges posed by aging individuals. Panelists suggested actions that health care professionals can take to help people maintain good cognitive health as they age. Public health officials, for example, should:

Health providers should encourage their older patients to be physically active and work with them to reduce cardiovascular risk factors, such as hypertension, diabetes and smoking.

In addition, panelists said that medical and nursing schools, professional societies and health organizations should increase their focus on cognitive aging, distinct from clinical syndrome and disease.

For individuals, lifelong learning and social engagement can have a positively effect on cognitive health. Adequate sleep and treatment for sleep-related disorders are also high on the list of action items. It’s important for older adults and families to be aware of the possibility for financial fraud, impaired driving skills, and poor decision making as cognitive ability declines. Decisions should only be made based on reliable evidence from trusted sources.

Journalists covering this topic may want to: