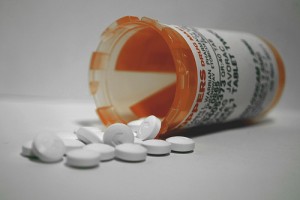 Last week, I shook the medicine bottle and felt just a few pills left. At the same time, weather forecasters were tracking hurricane making its way toward the eastern United States. I picked up the phone, called the 800-number on the bottle, punched in my prescription number and my refill was on its way. My biggest worry, as I eyed the last few pills clinking at the bottom, was whether this storm would somehow delay the delivery.

I know, I know: first-world problems. I was thinking about that as I read Aaron Carroll’s viral piece on his prescription refill ordeal.

Carroll, a professor of pediatrics at Indiana University School of Medicine, detailed his quarterly struggle to get refills to treat his ulcerative colitis, juggling lab orders, blood tests, pharmacy networks and doctor’s orders. Reading his play-by-play, it’s easy to see the stress this involves. His piece, “Trapped in the System: A Sick Doctor’s Story,” published in The New York Times’ Upshot blog, quickly generated hundreds of comments.

And doesn’t everyone have some kind of prescription horror story to share? Not just in obtaining refills but in getting the prescription, getting it filled and so many other small steps that can quickly swell into bureaucratic nightmare. In fact, Carroll’s story prompted such a storm of feedback that he published a follow-up Q&A on another blog he contributes to, The Incidental Economist.

I’ll admit. I read both of Carroll’s pieces with a twinge of survivor’s guilt. As he wrote, having health insurance is “only one measure of access. In many other ways, access is still surprisingly bad.”

Coverage ends up just one of the hurdles, notes Carroll, who is also an associate director at Indiana’s Children’s Health Services Research Program. For him, the medicine is life-changing and leads him to a nearly symptom-free life amid a disease that can truly be a panic-inducing and potentially embarrassing. What’s vexing is that his condition is not rare and doesn’t require any specialty medicines. And it’s still painfully hard to get.

Carroll writes, “The medicine is old and it’s generic. It costs about $80 for three months even though I haven’t met my deductible. But this story isn’t about money. This is about the nightmare of how hard it is for me to get the drug.” He spends countless hours shepherding his prescription and tests through the system just to find relief.

Millions more people in the past few years have access to health insurance though subsidized plans on the health care exchanges or states’ expansion of Medicaid under the 2010 healthcare law. But, when it comes to medicine, Carroll’s piece highlights that just having the benefits doesn’t necessarily bring them to your door.  In my case, it did – before the storm that never materialized. But, weather aside, what about people who don’t know how to navigate the system? Someone working two jobs without the time to devote to chasing around doctors and lab orders and results?

If someone like Carroll has a tough time getting his meds, it doesn’t bode well for everyone else. As he wrote: “This could be so much simpler.”