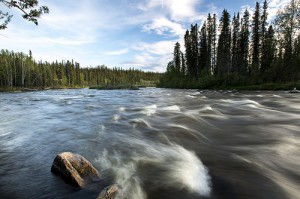 President Barack Obama’s trip to Alaska this week is aimed at highlighting climate change and the environment, but his health care overhaul has turned up in the news, too.

This particular story by Alaska Public Media’s Annie Feidt paints the Alaskan health landscape in full relief, profiling the state’s top health official amid wrangling over the expansion of Medicaid under the Affordable Care Act, or so-called Obamacare.

Feidt’s radio piece followed the state’s health and social services commissioner at her home in Bethel near the Bering Sea as she prepares – what else?– salmon for a dinner she will host with health policy experts. For listeners far removed from the isolated U.S. state, the profile gives a good introduction to the challenges facing the state and a sense of the people and life there, albeit a brief one.

What struck me was the uniquely Alaskan argument she made for urging the expansion of the joint federal state-program for the poor. I won’t quote it here. You’ve really got to listen to the story, which aired on NPR early Tuesday morning.

Later on Tuesday, Alaska Gov. Bill Walker moved forward to extend the program following a court ruling allowing the expansion to proceed. Walker had previously said he would do so without the approval of state legislators, who are now preparing to sure the governor, the Alaska Dispatch News reported.

In doing so, Alaska became the 29th state, along with Washington, D.C., to widen Medicaid under the ACA, according to the White House. Twenty-one other states have not.