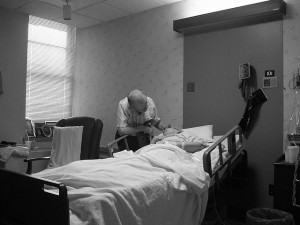 Hospice use is a common indicator of quality end-of-life care. The timing of hospice enrollment is an important component of that care, and a recent study finds wide variations among states.

Researchers from Yale University compared 2011 hospice use data on a state-by-state basis of 660,000 Medicare patients during the last six months of their lives. They identified several key trends among states in the rates of very short or very long hospice stays (reflecting late or early enrollment) and of patients leaving hospice before their deaths.

The goal was to identify less-optimal patterns of use and improve overall hospice care. Hospice provisions were recently added to the Improving Medicare Post-Acute Care Transformation Act of 2014 (IMPACT Act), which as means to eventually improve outcomes, mandates reporting of standardized patient assessment data for quality measures, resource use and care coordination.

Nationally, 47.1 percent of the beneficiaries used hospice care during this period. Rates varied across states from 20.3 percent in Alaska to 60.8 percent in Utah. Nearly half of all hospice users (49.7 percent) had potentially concerning patterns of use; either using hospice for longer than 180 days or less than seven days or were disenrolled prior to death (9.9 percent, 32.4 percent, and 8.5 percent, respectively). These utilization patterns raise concerns because patients and their families might not be receiving the support they need when they need it.

The analysis found that “the proportion of hospice users with potentially concerning patterns of hospice use (very short, very long, or disenrollment) also varied distinctly across states, ranging from 38.8 percent in Vermont to 56 percent in Rhode Island.”

Oregon was in the highest quartile of hospice use as well as in the lowest quartile of potentially concerning pattern of hospice use. Researchers said this was possibly due to the state’s Death with Dignity Act, “which reflects more open conversation and careful evaluation of end-of-life options, more appropriate palliative care training of physicians, and more efforts to reduce barriers to access to hospice care.” This has resulted in more hospice referrals and reduced potentially concerning patterns of hospice use in that state.

The study concluded that state-level variation in the prevalence of potentially concerning patterns of hospice use was “substantial,” and that hospice use alone as an indicator of quality of end-of-life care may mask other issues that require attention.

The study also found that those more likely to use hospice care were:

However, access to hospital-based palliative care was not associated with use of hospice.

For reporters covering hospice, palliative care and end-of-life care issues, be sure to check out these resources: