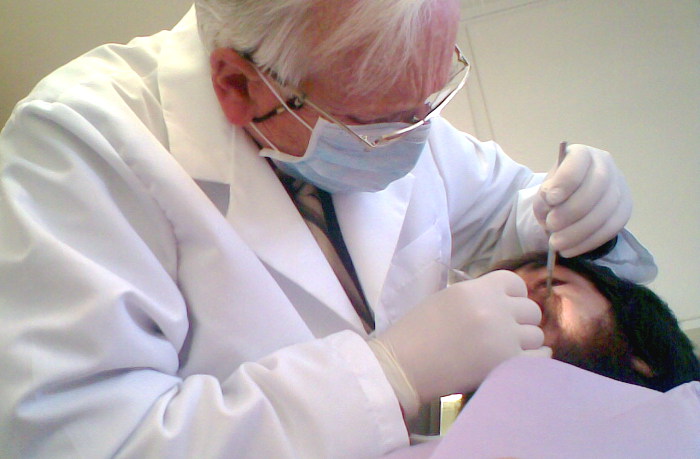 Photo by via Ace Armstrong Flicker.

Getting dental care was already hard for low-income adults in Arizona.

Now officials in Coconino County have reluctantly announced their decision to close a dental clinic that has long served the poor and uninsured.

County officials say they are considering a plan to provide vouchers so patients can seek care elsewhere. But there is no guarantee the voucher program will be in place by the time the clinic closes on Sept. 30.

And other questions remain: What services will be covered by the vouchers? Which dentists will accept them?

Shuttering the clinic and replacing it with a new system was a difficult decision to make, officials told Emery Cowan, who covered the story for the Arizona Daily Sun.

“I am convinced that there is a tremendous need out there for dental clinic services,” county supervisor Liz Archuleta said. “That is why it is difficult for me to break away from the more historical mode (of the dental clinic.)”

A number of factors led to the decision, Cowan reported.

“Perhaps the biggest, several people said, is the difficulty finding and retaining a dentist to staff the clinic,” Cowan wrote. The 32-hour-per week job offered a salary of $109,333 which, combined with the lack of student debt repayment assistance, made it hard to attract and keep dentists, particularly recent dental school graduates burdened with heavy loans, Denise Burley, clinical services manager at the county public health services district told the newspaper.

Missed appointments were another problem at the clinic, which charged patients on a sliding scale based upon income.

“Most of these people are living paycheck to paycheck so if they have a need it really is emergent,” Burley said. “If we are unable to get them in very quickly and we are booking a week out they may not come because they no longer have the money.”

The clinic was running deep in the red. It was expected to run a deficit of more than $312,000 next year, Cowan reported.

The ability to bill Medicaid for some of the care provided to the adult patients might have helped sustain the program. But Arizona is one of a handful of states (together with Alabama, Delaware, Maryland and Tennessee) offering no adult dental benefits at all, Christine Vestal reported  recently for Pew Charitable Trusts’ Stateline News.

Emergency dental benefits for extractions and root canals were once included in the state’s adult Medicaid plan, but were eliminated with the passage of the state’s fiscal year 2009 budget, according to the Arizona Dental Association.

Since then, the state dental association, joined by other health advocacy groups, has pushed to have the emergency dental coverage restored. They cite state hospital data indicating that emergency department dental visits and hospital admissions for dental pain and infection spiked after the cut was made.

In recent years, hospital emergency departments have drawn millions of poor and underinsured patients coping with dental problems. Yet hospitals remain tremendously expensive and ineffective sources of dental care, a number of studies have found.

Will the former patients of the Coconino County clinic find the care they need under a new voucher system? Will they turn to local hospitals with dental pain and infections? Time will tell.

Meanwhile, does your county have a dental clinic? Is there a story unfolding there?