View all posts by Michelle Tevis → 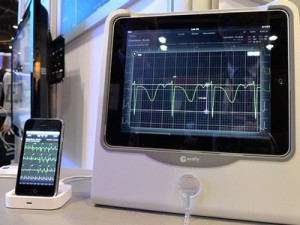 We have a lot of cool gadgets, but how can they really improve our health? And can they change health care? We are in a state of wearables 1.0, so what does wearables 2.0 look like?

Andrea Kissack, senior science editor at KQED-San Francisco, asked those questions at the outset of the panel “Wearables: Possibilities for consumers and health professionals” at Health Journalism 2015.

The panel provided possibilities for future use as well as focusing on some of the most recent wearables. Panelists also talked about wearables that seek to change health behavior and help manage chronic conditions.

Malay Gandhi is with Rock Health, which is an investor in wearable technology. Rock Health has five companies that are developing wearable technologies that track everything from blood metabolites to respiration. The company is interested in deep clinical use cases, and also does its research – it completes four reports each year covering health topics and where people are investing and why.

Christine Lemke of Evidation Health helps run studies on devices so we can see numbers behind the claims used to market them.

She provided these data points:

Geography is broad, covering all 50 states. California is a little over-indexed; New York is under-indexed. Texas, Minnesota and Pennsylvania had much higher usage than one would expect.

The popular notion is that people ditch these things, but these disconnecting numbers were surprising, Lemke said.

Days of usage prior to disconnecting

Lemke said Evidation thought churn rate was lower on apps, but users tend to remove them quickly from their phones.

Jenny Hapgood with Chrono Therapeutics said the company has developed the first application to revolutionize how people quit smoking.

The effects of smoking kill 500,000 Americans each year and cost $200 billion annually. There are 45 million smokers, and 70 percent want to quit. Those who do want to quit try and fail eight to 10 times.

The device is a low-profile wearable that looks like a cyber-nicotine patch. It has a motor, a computer and is Bluetooth-enabled.

The device has sensors that to allow for real-time tracking of use, and sends info to a consumer’s smartphone with coaching applications that help people develop quitting skills by changing their habits.

Kissack said KQED Science compiled some devices to compare what they do.

One attendee asked how health journalists should write about new wearables pitched to them by local companies – effectiveness and mechanics might be uncertain if a wearable is still in development, and reporters might not know what questions to ask.

Ask about who would use it, Lemke said, as well as what its health outcomes are, and whether it has it made a difference in some clinical measure. She also suggested asking statistics questions like readmissions, turn rates and longevity.

Kissack said to focus on the research side of companies developing wearables: If they’re not going through trials, what are they doing in terms of studies that makes them different?

Gandhi recommended using the device software to see how it’s packaged and marketed, and whether it lives up to its claims.

Another attendee posed a question about privacy, and the panelists seemed to agree that privacy was something that users were willing to forgo as long as they had control over who got their data. However, they were much less willing to let a third party share their data. Gandhi said people are more comfortable sharing their data, but not with companies doing it on their behalf. He said Rock Health has done a survey on privacy that will be ready in June.