View all posts by Anna Gorman → 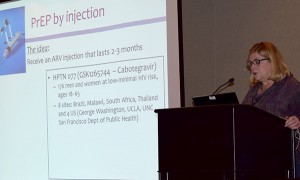 Pia Christensen/AHCJSharon Hillier, a professor at the University of Pittsburgh School of Medicine, discusses the pre-exposure prophylaxis pill, or PrEP, which can help prevent HIV infection.

HIV prevention and treatment have undergone a revolution since the disease first appeared, but there are still barriers to reaching the most at-risk populations, HIV experts said during a session at Health Journalism 2015.

While HIV patients in 1985 had a life expectancy of at most 10 years, now they are living into old age and are more likely to die from smoking, said Brad Hare, director of HIV care and prevention at Kaiser Permanente San Francisco.

Researchers are working toward a cure and people without HIV can take a prevention pill to keep them from becoming infected.

The pre-exposure prophylaxis pill, or PrEP, is “extremely effective” when taken every day, said Sharon Hillier, a professor at the University of Pittsburgh School of Medicine. Hillier said that the problem is that many – including young, unmarried woman – don’t take it consistently. The women have said in studies that they fear the side effects or the stigma associated with taking the pill, Truvada.

“Just because we have a strategy that can really work doesn’t necessarily mean it’s the best strategy,” Hillier said. “The most effective product is the one that is used.”

The pill is also expensive, making it out of reach for many. Hiller and others are trying to develop other ways for people to take the new drug. Among the possibilities are gels or dissolvable strips.

Despite the progress, an estimated 1.2 million people are living with HIV. Many are not connected to care, and there are wide disparities in diagnosis and access. Young black men, in particular, are at much higher risk than other populations to become infected.

Several factors contribute to their high rates of HIV, including poverty, childhood sexual abuse and having older partners, said Christopher Chauncey Watson, director of clinical research for George Washington University. Blacks in general make up about 1.4 percent of the population but represent about half of new infections annually, he said. Watson said there should be more attention and resources focused on those at highest risk.

The panelists shared story ideas, including why people aren’t using PrEP, how PrEP is changing the culture around gay sex, those aging with HIV and how HIV+ people are creating families.  The session was moderated by Heather Boerner, author of “Positively Negative: Love, Pregnancy, and Science’s Surprising Victory Over HIV.”