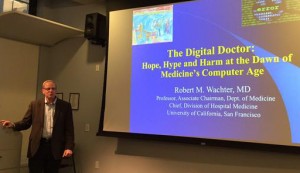 Wachter said he was excited about the push for computerized medicine a decade ago. “We had this grand idea that they [computers] would solve everything.” However, he since has come to believe that was that although computers are transforming his profession, it isn’t always for the better.

Curious about what other health professionals thought, he began talking to physicians, nurses, and allied providers around the country. Ninety interviews and 2,000 pages of notes later, he distilled his findings into his book, “The Digital Doctor, Hope, Hype, and Harm at the Dawn of Medicine’s Computer Age.” (Full disclosure: each attendee received a free copy of the book.)

One of the challenges of computerized medicine, he said, was that “people don’t look at each other any more.” Doctors are so focused on checking boxes and filling in fields on their screen that many barely glance at the patient during the brief office visit. “It’s no wonder that scribes are the fastest-growing occupation in medicine,” he said.

Wachter described the lack of incentives within the health care industry to switch from traditional analog notes and paper files, until 2004, when President Bush established the Office of the National Coordinator for Health IT (ONC). ONC was supposed to encourage computerized record-keeping, share information among providers, and improve outcomes.

As a further push to digital, Medicare and Medicaid established financial incentives for the “meaningful use” of certified electronic health records technology. “The feds got very hands-on,” Wachter explained. In retrospect, he said, it was another example of government overreach, because standards among facilities of varying size and capability could not become uniform.

The changeover also created a different set of issues. He described a time in medical school when students would interact with radiologists, share information and make informed decisions based on collective knowledge. Or when residents and attendings would gather at the nurse’s station because that’s where the charts were kept. It naturally fostered discussion and information sharing. Now, residents retreat to the computer lounge to fill in their notes on laptops. Alone.

This approach changes the whole social dynamic of medicine, Wachter said. “We assume the computer is right and we’re losing the human side of processing information.” The case in point: a 12-year old boy with chronic immunodeficiency disorder, receiving about a dozen different medications, was admitted to the hospital.

The attending physician wrote an order for one of the boy’s standard medications. The EMR system required a cross check of this prescription by the pharmacist, based on several default criteria. However, instead of ordering one pill of 160 mg per dose, a simple input error recalculated this to 38.5 pills per dose.

The IT vendor, EPIC, had equipped the EMR system with numerous alerts to avoid such potentially harmful errors. However, clinicians often overrode alerts because there were so many, often for inconsequential reasons; the system lacked the ability to flag or discriminate between a serious error or one with a minor inaccuracy.

Everyone involved – the physician who reconfirmed the order, the pharmacist who processed it, and the nurse who dispensed 38.5 pills to a 12-year old ill child, ignored these alerts and saw what they expected to see, Wachter explained. They saw that the numbers were right but completely missed that the dosage calculation variable was wrong.

Had this been a handwritten order, Wachter explained, it simply would have included the name of the drug, the number of pills and frequency.” Instead this electronic order went into a computerized system that spit out a potentially fatal dose in bar-coded, sealed packets, then confirmed that dose with the floor nurse. Despite the questions in her own mind, “the system” told the nurse to proceed.

It wasn’t long before a “code blue” was called. Fortunately, the boy survived.

Wachter uses this case – which occurred at his hospital – as a cautionary tale of professionals relying too much on the system and not enough on their own thinking and experience. Robots fill orders, staff is under pressure to keep up, some fear appearing incompetent if they question orders, resulting in “a Swiss cheese model of patient safety.”

There may be safeguards built in, but if each layer has holes, eventually something will slip through. “We saw technology as plugging some of the holes, but what’s happening is it’s making new holes,” he said. “The system was designed to facilitate billing and reimbursement, not to primarily take care of patients.”

Changes have since been made, in both the EMR system and in the hospital’s internal processes.

Wachter said that more human initiative is necessary around those layers of Swiss cheese. “There needs to be a ‘stop the line’ culture.” Health professionals need to know they can call a halt to what’s happening if they’re not sure it’s right, without any negative repercussions.

“The system is not intelligent. It doesn’t have all the answers, despite what we want to believe,” he said.

Over-reliance on computer systems by health professionals have allowed the informal knowledge transfer to go away. “We need to step back and re-create those old relationships,” he concluded.

Editor’s note: Physician and bestselling author Abraham Verghese, M.D., will speak at Health Journalism 2015’s kickoff session on the importance of bedside medicine and physical examination in an era of advanced medical technology.