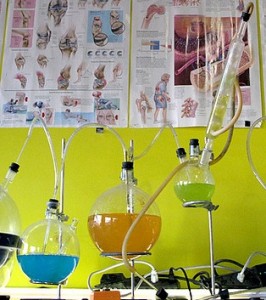 The Internet era has helped them do just that. Forty-seven percent of scientists surveyed said they used social media to “discuss or follow science,” and 24 percent blogged about research or science. An increasingly diverse mix of digital and traditional resources helps them stay current in their field and communicate with the public, and their levels of public engagement tend to vary by scientific discipline.

There has also been an increase in scientists who said news coverage is important to their career. In 2009, 62 percent of respondents reported that new coverage was “not too important,” but in 2014, that number had decreased to 56 percent.

The report’s findings illustrate the porous nature of information exchange, as well as the increasing ease of disseminating data and information. But what about how the public processes that information?

Additional demographic breakdowns from Pew revealed a disconnect between scientists and certain sectors of the public on issues like GM foods, vaccines, evolution, and climate change. Beliefs on evolution vary by religious affiliation, while those less likely to accept climate change tend to be over age 65 or lack a college education.

But sometimes the disparities between public opinion and scientific findings weren’t so clear-cut. Generally, more scientists than members of the public felt that vaccinations should be required (86 percent as opposed to 68 percent). Republicans, young people, and independents were more likely to say parents should decide whether to vaccinate their child, but the authors said “there were no significant differences in views about this issue based on gender, education or race and ethnicity.”

Similarly, men were slightly more likely than women to report they never checked food labels for GM labels, but the survey reported only “modest differences” between subgroups over opposition to GMOs. In general, 88 percent of AAAS scientists surveyed said GM foods were safe to eat – as opposed to only 37 percent of the public.

That survey was nationally representative and included 2,002 American adults. Later this spring, Pew will issue a more detailed report about attitudes toward science topics.