Wendy Wolfson is a science writer based in Irvine, California. She covers innovation in biotechnology, medicine and healthcare. She has been a columnist for Chemistry & Biology (Cell Press), and freelance contributor to NPR, Nature Biotechnology, Science, Red Herring, The Lancet, Bio-IT World, Wired, The Boston Globe and CURE magazine.

View all posts by Wendy Wolfson →

In Los Angeles, the chances of a child developing type 2 diabetes fluctuates by ZIP code, according to Ellen Iverson, M.P.H., a medical anthropologist and public health investigator at Children’s Hospital Los Angeles.

At the Nov. 6 AHCJ chapter meeting, at the Los Angeles Times, Iverson and Steven Mittelman, M.D., Ph.D., a pediatrician/cancer researcher at Children’s Hospital Los Angeles who directs the Diabetes and Obesity Program, discussed why diabetes disproportionately affects kids in certain neighborhoods and what community interventions could be effective. 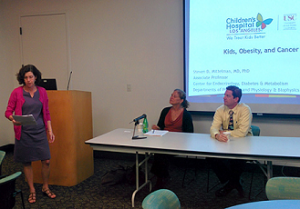 Mittelman’s field is childhood cancer. In adults, obesity raises the risk of developing cancer by 20 percent but, in children who have cancer, obesity leads to significantly worse outcomes. According to Mittelman, diabetes hits kids harder than adults. Most adults can control diabetes with drugs like metformin for years. “Most kids need insulin within three to five years,” Mittelman said.

Factors that include the barrage of junk food advertising aimed at kids, our evolutionarily developed efficiency at storing fat, the upswing in portion size (in the past 70 years, serving sizes increased 63 percent) and ubiquitous sugar (soda drinks containing sugar don’t have the same degree of satiety as sugar in food) contribute to obesity.

Mittelman referred to Professor Brian Wansink’s tongue-in-cheek ice cream social experiment, in which Wansink served ice cream to a group of nutritionists while surreptitiously using different sized bowls and scoops, proving that even nutritionists are bad at judging portion size. Mittelman also brought up emerging research into potential triggers for diabetes, such as intestinal bacteria changes, the role of fine particulate air pollution creating bigger fat cells and heightened insulin insensitivity, and the effects of pesticides.

Iverson and her team study the social ecology of communities at risk; examining factors like under-resourced schools that depend on fast food sponsors to pay for their school programs, families who have to work at multiple jobs, have little time to cook and limited access to grocery stores carrying fresh vegetables and depend on fast food because it is affordable.

Iverson cited neighborhoods such as mostly African American South Los Angeles and mostly Latino East Los Angeles, where an overwhelming percentage of schoolchildren depend on subsidized lunches, more than half of families reported food insecurity, and there are few parks and recreational spaces. In the higher-income neighborhood of Manhattan Beach, just one ZIP code over, nearly every kid was in afterschool sports. 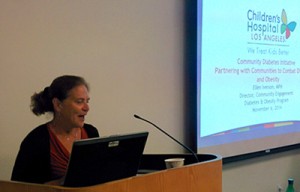 Iverson discussed a series of interventions developed after two years of brainstorming with community leaders, such as a hugely successful summer camp offered through a local church. As part of the church’s outreach, congregants are referred to primary care. Iverson emphasized the importance of initiatives being developed via input from the community and that had sustained follow-up and rigorous assessment.