A new report from the Leapfrog Group couldn’t be more timely given the attention hospitals have received recently on the need to improve patient safety, particularly infection-control procedures. 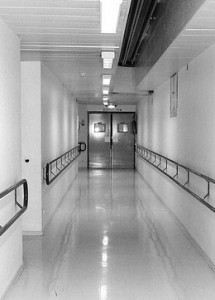 On Wednesday, Leapfrog released a report showing a lack of progress on patient outcomes and a decline on certain patient-safety measures, such as preventing surgical site infections during major colon surgery.

The data also show that hospitals made improvements in processes and safe practices, such as instituting hand-hygiene policies and physician staffing in intensive care units. For the safety scores of 2,500 general hospitals, Leapfrog assigns A, B, C, D and F grades based on a hospital’s ability to prevent errors, injuries and infections.

Leapfrog’s report draws attention to the facts that hospital errors kill as many as 400,000 Americans annually, and that one in every 25 patients gets an infection while hospitalized, Leapfrog said.

To grade hospitals, Leapfrog uses 28 evidence-based measures of patient safety to calculate a numerical score for all eligible hospitals. Then, it coverts the numerical score into a letter grade in which an A represents the best hospital safety score and F is the worst. On its Hospital Safety Score website, Leapfrog explains its methodology in detail.

“While the data tells us that hospitals are improving their safe practices, it’s concerning to see them moving backward on any measure,” Leapfrog’s president and CEO Leah Binder said in a press release. “Patients enter a hospital trusting they’re in a safe place, but with 41 percent of hospitals receiving a C, D or F grade, it’s clear that some hospitals are safer than others.”

Consumers should be aware that even top-scoring hospitals often fail to meet patient-safety standards, she noted. Texas Health Presbyterian Hospital in Dallas, where Eric Duncan died of Ebola earlier this month, received an A grade on the Fall 2014 Hospital Safety Score for its past performance on safety.

“The recent mishandling of Ebola cases proves that as a country, our hospitals must work harder to become prepared for this and any future threats,” Binder commented.

One of the best ways to cover this story is to compare hospital scores in a city, region, or state, as Carol Gentry did in an article for Health News Florida. Note that she provided links to all state scores and all Florida scores.

“Nearly half of Florida hospitals have earned an A on error prevention in a new report card from a business-backed group concerned about patient safety,” Gentry wrote. “The ratings from The Leapfrog Group, released Wednesday, show Florida fifth among the states on its safety scores (see all state scores). No Florida hospitals flunked, and just three scored a D (see Florida scores).

Another way to cover this story is to focus on hospital infection rates, a topic Jordan Rau, a senior correspondent for Kaiser Health News, covered for the Columbia Journalism Review on Oct. 28. In his article, “Hospital infections kill more people than car crashes,” he explained that Ebola has killed one person in the United States, but about 75,000 people die each year from health care-acquired infections.

“Despite the public health risk they pose, these infections don’t draw a lot of media coverage. But the national focus on Ebola gives journalists a news hook to write about the domestic infections that kill scores of patients in their own backyards. And a database maintained by the federal government—one of the newest, most detailed, and underused health data sets around—makes it easier than ever,” he wrote.

In that dataset, the federal Centers for Disease Control and Prevention has reports on health care-acquired infections from more than 3,000 hospitals and the attributes more than 125,000 infection cases to specific hospitals, Rau reported. He explains how to get the most from the CDC’s data.