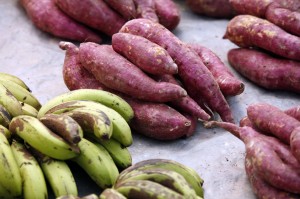 Photo by Australian Department of Foreign Affairs and Trade via Flickr.

Postmenopausal women who eat foods higher in potassium are less likely to have strokes and die than women who eat less potassium-rich foods according to new research in Stroke, the journal of the American Heart Association.

Stroke is the fourth leading cause of mortality in the United States, and as this infographic shows, women account for 60 percent of all stroke cases in the U.S. Women also have higher lifetime risk of stroke than men.

In this observational study, researchers tracked 90,137 postmenopausal women, ages 50 to 79, for an average 11 years. They looked at potassium consumption, incidence and type of stroke and mortality during that period. The average dietary potassium intake from food —not supplements — was 2,611 mg/day. All participants were free of stroke history at baseline.

Researchers concluded that high potassium intake was associated with a lower risk of all stroke and ischemic stroke, as well as all-cause mortality in older women, particularly those who are not hypertensive.

Only 2.8 percent of women in the study met or exceeded USDA recommended Adequate Intake (AI) for potassium of 4,700 mg per day. “Few Americans, including all age-gender groups, consume potassium in amounts equal to or greater than the AI,”according to 2010 dietary guidelines.

(For other nutritional requirements specific to older adults, check out this terrific tip sheet from member Melinda Hemmelgarn).

At the same time, too much potassium can cause heart problems. Older women should, of course, check with their health provider prior to making major changes in diet or supplement intake.

Take a look at causes of hospital admissions — specifically stroke admissions — and look for any association to low-potassium diets.