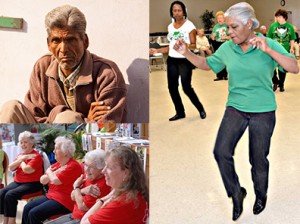 The value different societies place on the elderly has a lot to with how they are cared for later in life, evolutionary biologist Jared Diamond explained in a recent TED talk. These effects in turn, influence public policy for global long-term services and supports. The International Federation of Social Workers recently noted, “Although older adults serve as essential resources to their communities, they face a great risk of marginalization.”

In addition to cultural and self perceptions of aging, family living arrangements and social networks are also connected to healthier aging. A Pew Research report looked at some of the negative perceptions associated with aging in the U.S.

As Ann Bookman and Delia Kimbrel wrote in “Families and Elder Care in the Twenty-First Century,” elder caregiving varies by gender, race and socioeconomic status. Families from African American, Latino, Asian, Native American, and other minority groups bring their own strengths and needs to the caregiving experience. They noted, for example, that few families from racial or ethnic minority groups use paid outsourced care.

Finances play a role in these groups, but so does a culture of extensive social support, reciprocity, and interdependence. By comparison, Western European and white ethnic groups place a higher value on independence and self-reliance.

Cultural attitudes about aging can serve as a springboard for numerous story ideas: for example, an article that contrasts and compares how different communities – such as traditional Asian or Latino – perceive and value older adults.

Do the elderly tend to live with family members or are they cared for long distance? Are they put into nursing homes or assisted living facilities? Who carries the majority of the caregiving burden?

This AARP article discusses racial and ethnic differences in long-term care service use among older adults. This excellent article from New America Media looks at differences in attitudes about hospice and palliative care among ethnic groups, and this New York Times article examines the struggle among some Asian-Americans to honor their cultural code surrounding elder care.

AHCJ’s reporting guide, “Covering Health in a Multicultural Society,” has additional resources and ideas. AHCJ member Paul Kleyman has authored a terrific tip sheet on covering aging in ethnic and minority groups including a list of specialized resources and what questions to ask.