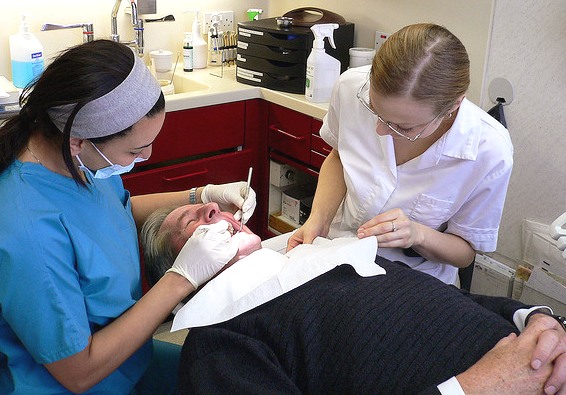 From dental therapists working in clinics in rural Alaska and urban Minnesota to hygienists using telehealth technology in California schools, innovative models are showing promise in getting cost-effective dental care to some of the millions of Americans who now lack it, according to a new study from the Pew Charitable Trusts.

Today’s report, “Expanding the Dental Team,” examines three nonprofit settings where midlevel dental providers are employed as part of larger dental teams. The paper concludes that the workers have successfully expanded services to previously underserved populations; and that their employment is a cost-efficient method of delivering care.

The report offers case studies of a tribal-owned clinic in Alaska; a federally qualified health center in Minneapolis and a telehealth project operated by the University of the Pacific School of Dentistry at sites in California.

Study researchers conducted site visits, interviewed dental team members, clinic administrators and patients and reviewed practice records for the three programs. They found wide variation among the practices but concluded that all three models allowed nonprofits to stretch their funds while providing increase access to care.

“Specifically, in the Alaska case in 2012, two dental therapists provided care to 1,352 patients, many of whom received regular access to dental care for the first time. When compared to the reimbursement value of the care they delivered, the therapists exceeded their costs of employment by a combined $216,000,” they wrote.

“In the Minnesota case, a dental therapist hired by a ‘safety net’ clinic that serves a primarily low income and heavily immigrant population conducted 1,756 patient visits in the study year. The estimated Medicaid revenue she generated exceeded her employment costs by more than $30,000, leading the clinic to hire a second dental therapist to address further unmet needs,” they added.

“In California, the Virtual Dental Home was able to serve low-income children who did not have a regular source of dental care,” the authors noted. While the dental home program is currently funded predominantly by grants, the study authors estimated that the revenue that could be generated by billing California’s Medicaid program would cover more than half of the program’s costs.

“At the national level, where average salaries are lower and the average Medicaid reimbursement rate is higher than in California, Medicaid payments could exceed program costs,” they wrote.

Most dentists do not accept Medicaid, complaining of its low reimbursement rates and bureaucratic red tape. Millions of Americans live in areas with dentist shortages. Thousands of people suffering from dental pain turn up in emergency rooms each year. A number of states are considering midlevel dental providers in their efforts to address such needs. Legislators in Maine recently approved a version of the dental therapist model, following the lead of Minnesota and tribal areas of Alaska.

Yet dental therapists, who provide a range of services including drilling and extracting teeth, have been fiercely opposed by dental organizations, including the American Dental Association (ADA). The group has acknowledged the nation’s “dental health crisis” but contends that no one except dentists should be allowed to perform irreversible surgical procedures.

As part of a larger “Action for Dental Health” initiative unveiled last year the ADA has been promoting its own alternative model, called a Community Dental Health Coordinator – not a midlevel provider but trained to deliver oral health education and prevention services.

At the same time, ADA leaders recently announced their support for the passage of the Action for Dental Health Act of 2014. The bill, HR 4395, introduced by Rep. Robin Kelly, D-Ill., would fund two five-year federal grants to support programs aimed at addressing disparities in access to dental care.

One grant would offer $10 million annually to qualified programs such as Mission of Mercy and Give Kids a Smile that assist dentists in offering free dental services to thousands of poor and uninsured people each year.